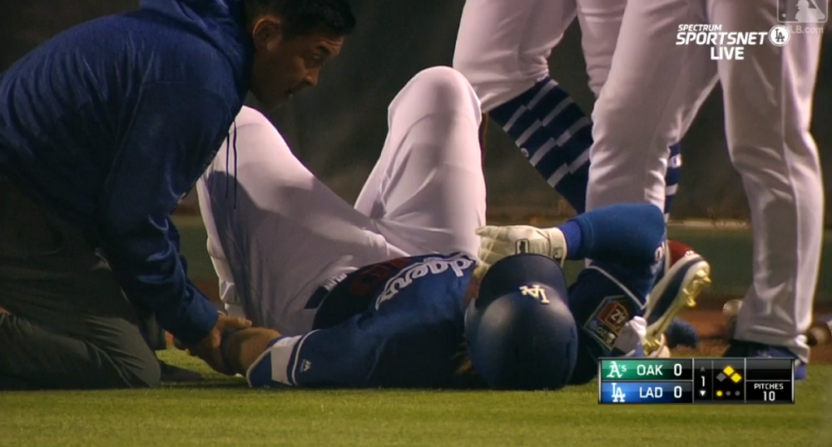 The Los Angeles Dodgers just lost one of their best players to a potentially devastating injury, and in a meaningless Spring Training game.

Third baseman Justin Turner was hit in the left wrist by a fastball in the Dodgers’ Cactus League game against the Oakland Athletics on Monday night. Turner went down in serious pain and left the game.

And it’s as bad as feared: Turner has been diagnosed with a broken left wrist, an injury that will likely sideline him for 6-to-10 weeks (so, likely at least into May).

The good news is that it’s not on the throwing hand for Turner, but the bad news is the bottom hand is also crucial to hitting, which is the department Turner excels in.

So, even if it’s potentially only a month of missed regular-season games, this is still a huge loss for the Dodgers. Yes, they have good depth, with Logan Forsythe likely to move over to third and Chris Taylor, Chase Utley, and Kike Hernandez likely to share time at second base. But Turner is their most reliable hitter and a rock-solid defender at third base.

Justin Turner was the Dodgers' best hitter in 2017 and is one of the unquestioned leaders of the team. So that is a problem.

Turner’s absence over a month+ probably knocks a win off the Dodgers’ record, but they should still be in good shape to win the division. FanGraphs currently projects the Dodgers for 93 wins, which is 11 games ahead of the next NL West team in their projections.

The bigger concern may be how Turner looks when he returns. Wrist injuries have been known to sap power for some hitters, and we won’t know if Turner can be the hitter he was expected to be in 2018 until we actually see him out there doing it. The Dodgers are deep and talented enough to be able to contend for a World Series title even if Turner isn’t quite the same guy when he returns, but it would obviously hurt their chances.

It really sucks when injuries ever happen, but it especially sucks when they happen in exhibition games. The reality is that there’s more harm than good that can come out of these games, especially after two-to-three weeks of action. Most of these players are training like crazy over the winter these days, with advanced pitching machines, simulations, and top-notch facilities available for them to use whenever they want. Most of them would’ve told you a week or two ago that they’re beyond ready for the season to start. It can be useful for figuring out roster spots, but that’s usually for the 25th man and most front offices have so much intel on these players that performance in exhibition games isn’t going to impact things much.

Sure, Turner could’ve just as easily gotten hit by a pitch two weeks ago or in the regular season, but the risk is increased with the more these games go on, when they don’t need to be. But hopefully Turner will return in the next six or seven weeks, and hopefully he’ll look like the same elite hitter he was before the injury.