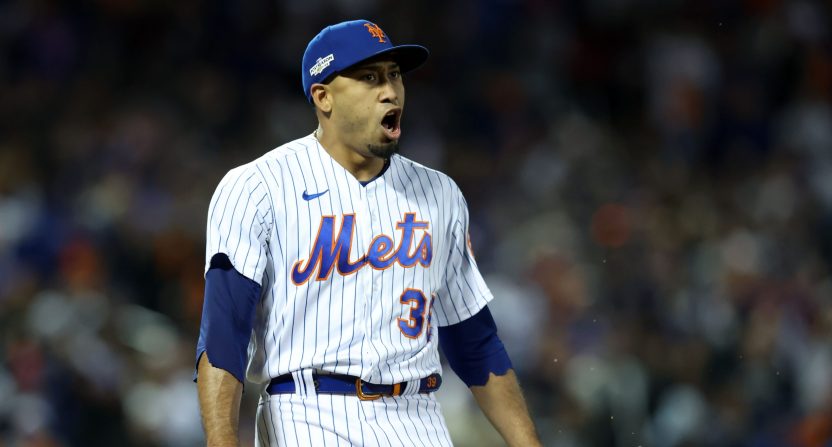 The New York Mets made a splash early in the offseason when they re-signed star closer, Edwin Díaz, to a record-setting contract, worth $102 million over five years. Only, there’s a little bit of a twist to the financial side of Díaz’s deal, and it’s one the Mets are quite familiar with.

Bobby Bonilla played his last MLB game in 2001. He played his final game with the Mets in 1999. When New York bought his contract out in 2000, there was a lot of deferred money. So, beginning in 2011, the Mets have paid Bonilla just under $1.2 million annually on July 1 and will continue to do so through 2035.

Similarly, while Díaz signed a five-year deal, he won’t receive all of the money in the five years. A total of $26.5 million will be deferred. Díaz will then get paid $2.65 million annually from 2033 through 2042.

I, for one, am looking forward to all the “Edwin Diaz Day” content in 2040. https://t.co/mkixkcBQKQ

Edwin Diaz: "Give me the Bobby Bonilla plan."https://t.co/nmHWwhp9ch

Starting 2036, my birthday will cease to be Bobby Bonilla Day and will be Edwin Diaz Day. https://t.co/S0aiV5uGEK

Smart way to do it! https://t.co/iYPpWBVTn5

While Bonilla’s deal with the Mets is the one that gets talked about the most, it’s not the only one of its kind. Ken Griffey Jr. was one of the highest salaries on the Cincinnati Reds’ payroll in 2022, despite not playing for them since 2008 and MLB since 2010.

And those are good deals for the players. Díaz is no different. He will be 39 when the deferred payments start and 48 when they end. His career will likely be over by 2033 and will certainly be over by 2042. With this, he’ll still get a good check once a year for a while after his playing days are behind him.