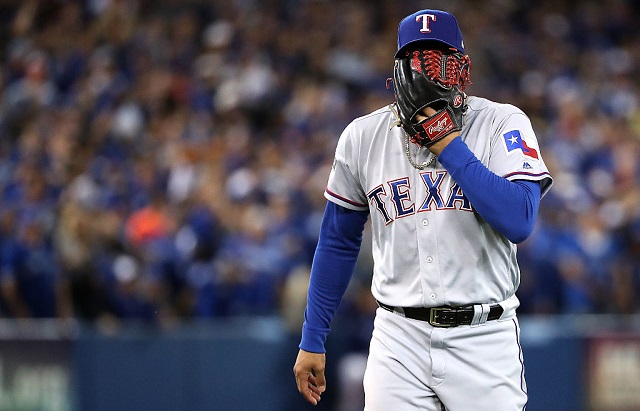 The postseason wasn’t supposed to go like this for the Texas Rangers. The Houston Astros may have looked like the new hotness in the AL West, but the Rangers were defending division champions and eventually asserted themselves as the best team in the American League. Time for a return to the World Series, right? Well… we’re writing the final words on their season in early October.

Texas finished with a 95-67 record, best in the AL and tied for the second-best mark in MLB. With the Cleveland Indians fighting injuriese to their starting rotation and the Boston Red Sox possibly weary from the AL East dogfight, the path to play for a World Series championship looked pretty clear. Yet a top-heavy starting rotation that pitched terribly in the ALDS and a bullpen that was exposed in the postseason was too much to overcome against a Toronto Blue Jays juggernaut. Getting swept in three games was one of the more stunning developments of the 2016 postseason. With a 36-11 record in one-run games, maybe the Rangers were a luckier team than we realized during the regular season.

Preseason Prediction: Ian Desmond transitions seamlessly to left field. The young outfielders in AAA make it hard for the Rangers to find playing time for everyone. Adrian Beltre Adrian Beltres. Yu Darvish returns without setback, even if only at 80% of past Yu Darvish. The rest of the rotation remains reasonably healthy, combining to at least match, if not better, their 88 wins from last year. That should be enough to remain in contention for the division title all year, with a wild card spot a fallback option. (Derek Harvey, March 4).

What Went Right: June was a great month for the Rangers, one during which they virtually put away the AL West. On June 1, Texas had a half-game lead over the Seattle Mariners, who had leapfrogged over the Astros to become the closest competitor in the division. By July 1, the Rangers had increased that lead to 8.5 games after going 20-8 in the month of June. As the end of the month approached, that lead was 10 games. It was easily the largest first-place lead in the American League and matched the margin that the Cubs held over the Cardinals in the NL Central.

Rougned Odor probably received more notoriety for clocking Jose Bautista in the jaw in May. But the second baseman had a breakout season for Texas after years of being considered one of the organization’s top prospects. Though Odor played in an average of 117 games over the previous two seasons, the 22-year-old appeared in 150 games this season. As a result, he provided big-time production, batting .271 with a .798 OPS, 33 doubles, 33 home runs, 88 RBI and 14 stolen bases. Unfortunately, Odor’s defense prevented him from ranking among MLB’s top second basemen in WAR. Advanced metrics dinged him with -9 Defensive Runs Saved and an -11.9 Ultimate Zone Rating. He gave back plenty of runs in the field.

The Rangers hoped at least one of their young outfielders would develop into a major league contributor, and rookie Nomar Mazara probably assured that he’ll be the starting right fielder for years to come. Mazara, 21, batted .266 with a .739 OPS, 20 home runs and 64 RBI. At one point, he looked like an AL Rookie of the Year favorite, but the Yankees’ Gary Sanchez might have overtaken him for award honors.

And if there was any thought that Adrian Beltre was on the decline after lesser numbers in 2015, the third baseman pounded that argument into the dirt this season. Beltre, 37, had one of his best seasons in Texas — and he’s had plenty of those. He hit .300 with an .879 OPS, 31 doubles, 32 homers and 104 RBI. On defense, he had a stellar season, credited with 15 Defensive Runs Saved and a 15.2 Ultimate Zone Rating. No one was better, according to advanced metrics.

What Went Wrong: It’s rather amazing that the Rangers won 95 games and took the AL West by nine games, considering how poor their bullpen was. Only the Twins had a worse bullpen ERA than Texas’ 4.40 mark. Yet the back-end of the Rangers’ relief corps was actually solid. Sam Dyson compiled 38 saves in 43 opportunities, though only struck out 55 batters in 70.1 innings. Matt Bush established himself as a top setup man, notching 61 strikeouts in 61.2 innings, and maybe should be the closer next season. Tony Barnette posted a 2.09 ERA in 60.1 innings. Jake Diekman and Alex Claudio also provided reliable relief out of the bullpen.

But the unit lacked a top-notch strikeout arm in the ninth inning that could tie the whole thing together. And arms like Shawn Tolleson, Keone Kela and Tom Wilhelmsen were far too unreliable to give the Rangers depth. That will have to be addressed next season.

The starting rotation was also inconsistent behind Cole Hamels. Colby Lewis was solid as the No. 3 starter and Martin Perez is probably a fourth or fifth starter. Yu Darvish was limited to 17 starts returning from Tommy John surgery, while also struggling with shoulder and neck injuries during the season. Plenty of other arms were tapped to fill out the rotation — Nick Martinez, Lucas Harrell, Kyle Lohse, Chi Chi Gonzalez — but were unsuccessful.

Most Surprising Player: With seemingly nothing to lose, yet needing help in their outfield, the Rangers took a bold chance by signing Ian Desmond to a one-year, $8 million contract. The terms of the deal didn’t make the move daring. Texas took advantage of the depressed market for Desmond (who infamously turned down a seven-year, $107 million contract in 2014, thinking he’d cash in big-time as a power-hitting shortstop) and signed him for what amounted to a bargain.

What made this deal particularly surprising was that the Rangers wanted the career shortstop to play left field. But it was worth taking a chance. Texas had a hole at that position with Josh Hamilton’s health questionable and an unproven mix of Ryan Rua, Jurickson Profar and maybe Joey Gallo. Desmond certainly seemed athletic enough to make the transition defensively. And if he hit to his usual standards, he’d provide some corner outfield pop in the lineup. What no one could have expected was for Desmond to thrive.

Not only did he play left field well, but Desmond did so well enough for the Rangers to move him to center field and replace the struggling Delino DeShields. Though he cost Texas -6 Defensive Runs Saved and allowed five runs more than an average center fielder, Desmond made up for it with his bat. He hit like the guy who was once offered a $100 million contract, batting .285 with a .782 OPS, 29 doubles, 22 homers, 86 RBI and 21 stolen bases. Did playing center field (especially in that Texas heat) wear him down, however? In the second half, Desmond was a different hitter, posting a .237/.283/.347 triple-slash average. That may give the Rangers some pause in offering a long-term extension.

Most Disappointing Player: Once upon a time, Derek Holland looked like a top-of-the-rotation starter for the Rangers. Accordingly, the team signed the left-hander, then 25 years, to a five-year, $28.5 million extension. But Holland couldn’t stay healthy, only making 33 starts and throwing 200-plus innings in one season since inking that deal in 2012. This season, a shoulder strain and later inflammation limited him to 20 starts (22 appearances), during which he compiled a 7-9 record and 4.95 ERA. Holland was especially bad during the final month of the season. Though the Rangers had a comfortable division lead, his 5.96 ERA and 1-3 record in four starts (six appearances) didn’t help matters.

Texas seems more likely to decline his $11.5 million option for next season (opting for a $1 million buyout), rather than seeing if he can be a part of the 2017 rotation. If he does return to the Rangers, it will certainly be at a lower salary.

The Future: The Rangers have a strong young core of talent that should keep them in contention for years to come. Plenty of MLB clubs would love to have Odor, Mazara, Profar, and Elvis Andrus to build around, with slugger Joey Gallo waiting to emerge.

But there are some holes to build around that nucleus. What will Texas decide to do with Mitch Moreland, who batted .233 with a .720 OPS at first base? Should Carlos Beltran be brought back as the designated hitter, even though he’s going to turn 40 next season? Bringing back Desmond would seem to be a priority, but between his second-half decline and likely free agent interest, that’s not as easy a decision to make as it might have seemed in July. Can the Rangers also expect anything from Josh Hamilton ever again?

Above all, general manager Jon Daniels can’t go into next season with the same pitching staff. The rotation needs help behind Hamels and Darvish. Colby Lewis and Martin Perez can’t be middle-of-the-rotation starters again. And if they are, there needs to be depth at the back-end of the starting staff. The bullpen appears to have decent depth, but needs an anchor in the ninth inning. With closers like Aroldis Chapman, Kenley Jansen and Mark Melancon available in free agency, the chance for an upgrade is there. Or if the decision is to make Matt Bush the closer, a top-flight setup man needs to be added. Those are quite a few deficiencies to fix in one offseason.