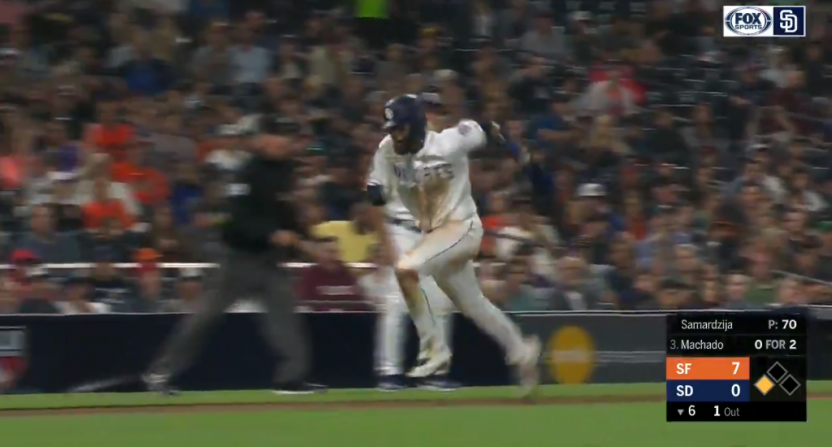 Fernando Tatis Jr. is putting together an absolutely ridiculous rookie season for the San Diego Padres. The 20-year-old has been a top-seven hitter in baseball by most every meaningful metric (OPS, wRC+, wOBA, etc), while playing solid defense at the premium position of shortstop.

Tatis is also all sorts of fun on the basepaths, something we actually took a look at during Spring Training. He has long strides (he’s 6’3″) and remarkable instincts to get around the bases quickly. And he uses those skills to take some risks that very few baserunners would.

Last week, Tatis scored on a pop-up to the Pittsburgh Pirates’ shortstop Kevin Newman. Newman — on an infield shift — caught the ball just a few feet behind the infield dirt in the area of second base.

.@tatis_jr tagged up on a POP-UP to second.

Fast-forward to Monday night at Petco Park, when Tatis was on third base for a Manny Machado at-bat against the San Francisco Giants. Machado hit a pop-up that was caught by Joe Panik in very shallow right field, and once again, Tatis scored.

Hey, remember when Fernando Tatis Jr. tagged up and scored on a pop fly to the second baseman in Pittsburgh?

These are obviously extremely risky plays, and major-league defenses should probably be throwing Tatis out at the plate. On the play in Pittsburgh, Newman was simply caught by surprise. Eventually, you’d think teams will be very aware when Tatis is on third base, and infielders won’t take pop-ups lightly. And on the play against the Giants, Panik made a terrible throw. Now, this will happen from time to time, and especially if a speedy baserunner is putting pressure on the defender (catchers can also have trouble cleanly catching throws that bounce, with a tag also necessary).

But regardless of whether or not it’s a smart play or will keep working- it’s just another example of the confidence this 20-year-old plays the game with and how dang fun he is.