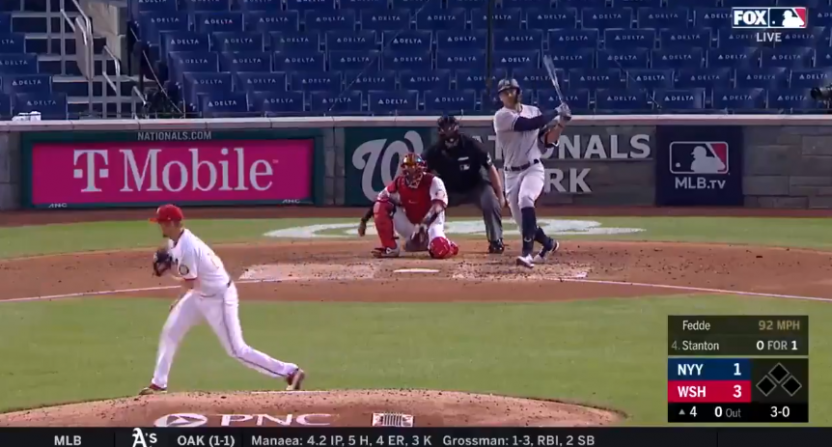 Your first home run of the 2020 MLB season is an absolute blast by Giancarlo Stanton off Max Scherzer.

Well, just two days later, Stanton topped that dinger with an even bigger blast at Nationals Park. Stanton obliterated a fastball from Nats starter Erick Fedde (starting in place of Stephen Strasburg), and sent it way up the (covered) seats in left-center field.

Stanton is looking like a MONSTER to start this season.

Another no doubt home run! pic.twitter.com/XTvXO6DmpV

The Fox broadcast displayed a graphic measuring the homer at 417 feet, but that seems well short (especially if we assume that the ball may have kept going for a while if the seats didn’t get in the way).

This was the Statcast Exit Velo HR leaderboard before today (hint lots of Stanton and Judge) 👇👇 pic.twitter.com/6GRGgC0buA

Stanton only played in 18 games in 2019 due to injuries, but he certainly looks healthy and primed for a powerful season at the plate in the 2020 season. The Yankees were a loaded roster to begin with, and Stanton returning to his superstar form would make them downright terrifying.