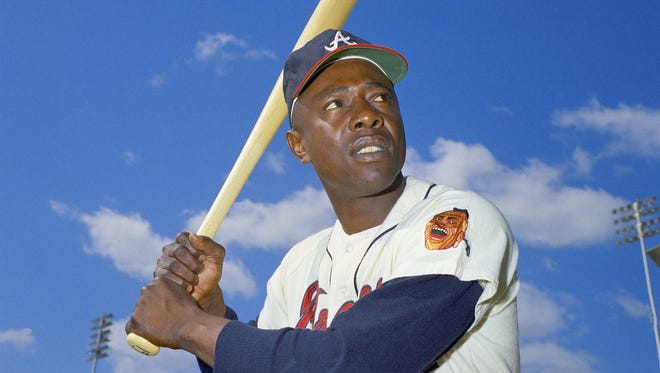 Baseball lost one of its iconic figures on Friday (Jan. 22) with the passing of Henry Aaron. The legendary slugger was 86 years old.

During his career, Aaron hit 755 home runs, which was baseball’s all-time record for 33 years until Barry Bonds surpassed it in 2007. (Considering the controversy over Bonds and performance-enhancing drugs, many believe that Aaron should still be considered the career home-run record holder.) He hit 40 or more homers five times, reaching 44 in four of those seasons.

Aaron won the top spot as the all-time home run leader in 1974 when he hit his 715th career longball to overtake Babe Ruth. (The historic homer was hit off Los Angeles Dodgers pitcher Al Downing, making him a permanent trivia question.) Ruth’s mark of 714 homers held for 39 years, set in 1935.

But Aaron was more than a slugger. He was an outstanding hitter as well, compiling 3,771 hits — the third-most in baseball history — during his 23-year career with the Milwaukee and Atlanta Braves, and Milwaukee Brewers. Both franchises retired Aaron’s No. 44 jersey number.

Aaron was truly a complete player. As an outfielder — the majority of his games played in right field — he won three Gold Gloves. He was also an underrated base stealer, notching more than 20 stolen bases six times in his career. In 1963, his 31 steals finished third behind Luis Aparicio and Maury Wills.

“Hammerin’ Hank” won the National League Most Valuable Player award in 1957, batting .322 with 44 home runs and 132 RBI. He won a World Series championship that season with Milwaukee. Aaron finished among the top five in MVP voting eight times (six of those in the top three) during his career and played on 21 All-Star teams. The only times he wasn’t an All-Star were in his first and final seasons.

As an Alabama high school junior, Aaron began his professional baseball career with the Pritchett Athletics, then the Mobile Black Bears, an independent Negro League team. In 1951, he signed with the Indianapolis Clowns of the Negro American League. But he only played with Indianapolis for three months before his talents couldn’t be kept out of the Major Leagues.

Aaron received offers from the New York Giants and Milwaukee Braves, but the Braves were willing to pay him more. He played two minor league seasons — first in Eau Claire, Wisconsin, then Jacksonville, Florida — before beginning his major league career in 1954.

In addition to his baseball achievements, Aaron was an advocate for civil rights throughout his life. As could be expected, Aaron encountered plenty of racism and threats to his life from those who didn’t want to see a Black man break Ruth’s home run record.

Growing up as a Black man in the South, he certainly encountered plenty of prejudice, abuse, and segregation. That only intensified once he began playing baseball and inspired him to campaign for the civil rights movement and presidential candidates whom he believed were supportive of the cause.

Following his playing career, Aaron worked in the Braves’ front office, holding positions such as vice president and director of player development, then senior vice president and assistant to the team president. He also held executive positions outside of baseball with TBS and The Airport Network, and was active in business with restaurants and car dealerships.

“Hank Aaron overcame poverty and racism to become one of the most accomplished baseball players of all time,” said President Bush at the ceremony. “When I was in a ballpark,’ he said, ‘I felt like I was surrounded by angels, and I had God’s hand on my shoulder.’

“By steadily pursuing his calling in the face of unreasoning hatred, Hank Aaron has proven himself a great human being, as well as a great athlete.”