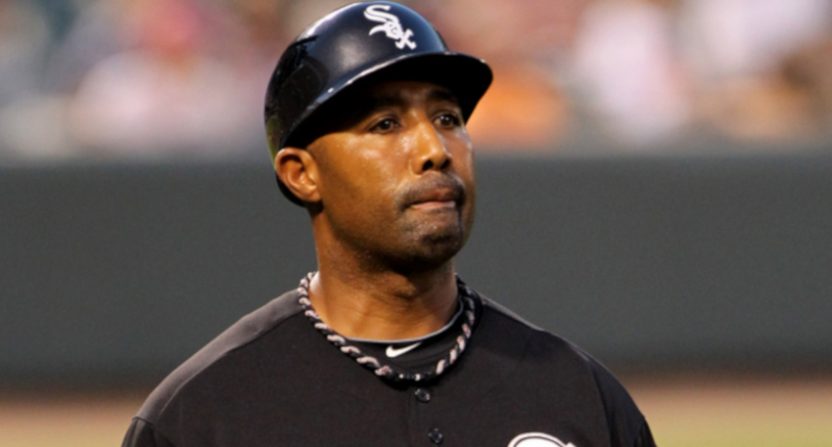 One of the most controversial Baseball Hall of Fame decisions in recent memory came Sunday with the news that the Today’s Game committee (formerly known as the Veterans’ Committee) had selected Harold Baines and Lee Smith for induction. Smith was reportedly a unanimous choice from the 16 committee members, while Baines received 12 votes, exactly the 75 percent threshold needed.

While Smith’s inclusion is a bit surprising, there’s an understandable case for him; he was one of the early single-inning closers, he averaged more than 10 strikeouts per nine innings in six of his 18 MLB seasons (unusual for the time), he led the league in saves four times and posted 11 seasons with over 30 saves, and he retired as the all-time saves leader with 478 (he’s since been passed by Mariano Rivera, who holds the current record of 652, and fellow Hall-of-Famer Trevor Hoffman who recorded 601).  Baines (seen above in 2011 as a White Sox coach) is a more unusual inclusion, and that’s created a lot of discussion of who else perhaps should have gotten in instead.

Baines only led the league in an offensive stat once (slugging percentage in 1984), never finished higher than ninth (1985) in MVP voting, and only lasted five years on the Baseball Writers’ Association of America ballot (topping out at 6.1 percent of the vote). By contrast, Smith lasted the maximum 15 years and received over 50 percent of the vote at times. And Baines’ induction has led to many either making “if X is in, then Y should be in” arguments, or just noting that a whole ton of people posted more impressive stats than Baines (not necessarily claiming they’re all Hall of Famers, but pointing out how weird Baines’ selection is). That’s particularly true when it comes to wins above replacement (WAR), where Baines has 38.7 by Baseball Reference (tied for 545th all-time with Magglio Ordonez, Ed McKean and Juan Gonzalez and just behind Paul O’Neill) and 38.5 by FanGraphs (346th, behind Tommy Henrich and ahead of Placido Polanco). Here are some of those tweets on both fronts:

Harold Baines has a lower career fWAR than:

Carlos Delgado has to be thinking – if Harold Baines got voted in to the Hall of Fame, when is my turn?

::crouches, whispers as softly as he can::

how is harold baines a hall of famer and not vizquel and lofton?

I won’t be reading my replies here so don’t bother.

I really, really don't understand this. WAR isn't everything, but Harold Baines had 38.7 in his career. Lou Whitaker had 75.1. Curtis Granderson has 47.7. He's behind Lance Parrish and Bill Freehan and tied with Magglio Ordonez. https://t.co/cuOKvso7H9

Mike Trout passed now-Hall of Famer Harold Baines in career WAR (38.3) back in May 2016. He still hadn't yet reached 700 career games.

There are 25 right fielders in the Hall of Fame. Harold Baines ranked 105th at that position in 7-year peak WAR. Behind names like Josh Reddick and Alex Rios.

Of course, that doesn’t mean that most of those players have any shot at all at the Hall of Fame. The committee in question here only gave 11 votes to famed manager Lou Piniella, and no one else under their consideration received over five votes. And it should be noted that a lot of Baines’ selection may have to do with who was on this committee; as Jay Jaffe noted, three out of the 16 voters (Jerry Reinsdorf, Pat Gillick and Tony LaRussa) had strong connections to him.

The BBWAA is notoriously much more strict with who it selects (the results from the writers’ votes will be announced Jan. 22), so there isn’t likely to be a tidal wave of players getting in there. But it’s fascinating to see a player like Baines with so few career WAR selected, and it’s led to many bringing up others who posted better totals there. And you can make quite the list out of those others.