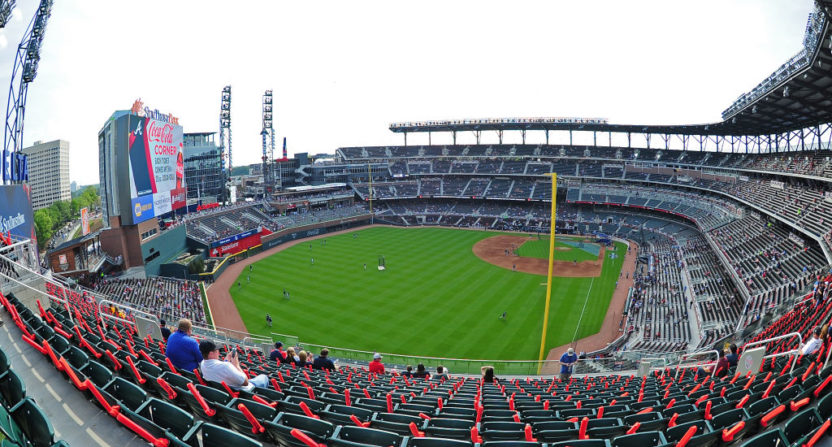 The Atlanta Braves sold the idea of building a new baseball stadium in Cobb County as a way to make it easier for fans to attend games by bringing the stadium closer to its fan base and making it easier to travel to games. Just two months into the baseball season, the shine of a brand new ballpark is already starting to lose steam in the attendance figures, according to Market Watch.

In a story published by Market Watch, the opinion of Jason Notte suggests Cobb County and the Braves may already be failing with the brand new SunTrust Park, despite an incredibly small sample size to work off of at this point.

Less than two months into Major League Baseball’s season, the novelty of the Braves’ new home has worn off — if it ever existed. A park that holds 41,149 has been averaging fewer than 30,500 fans per game. We’d say that’s a marked improvement over the roughly 25,000 to 29,000 the Braves had been averaging in their old home at Turner Field since 2014, but considering that the Braves announced their intent to abandon that stadium in 2013, those numbers feel a bit deflated.

To be clear, at this point in time, the Braves have played just 14 games in their new home stadium. That doesn’t mean there are not some surprises with the Braves attendance, however. The Braves are currently 12th in all of baseball in average attendance to games this season, with an average of 30,338 tickets sold per home game. That puts them ahead of division rivals in New York, Philadelphia, and Miami and right on the heels of Washington.

"#Braves find themselves lagging in two categories – victories and home attendance. There just may be a connection." https://t.co/O2Oe7FPAdL pic.twitter.com/KMYhDgsnri

This seems a bit early to be hitting any panic buttons if you are the Braves or a representative or resident in Cobb County. Things could easily start to look different in a short period of time, and that would obviously spike in a positive direction if the Braves manage to win some games. The Braves are just 6-8 at home and are 16-21 at the time of this writing. Suggesting it was a mistake to plop down so much money on a baseball stadium is fair, but 14 games into the stadium’s lifespan is just premature on evaluating the economic impact on a team and city or county. A stadium is a long-term investment and expecting it to immediately pay dividends is misguided, especially for a team that has had attendance concerns in the past leading up to the construction of the new stadium.

The Braves are still finding other avenues to make some money. That’s because the stadium is just one part of the main attraction. The attractions around the stadium have been designed with the intention of adding more sources of revenue to the Braves’ budget, and so far that has paid off enough to help overcome the drop in attendance. By getting companies like Comcast, Coca-Cola and LiveNation involved with filling out the surrounding area of the stadium with office space, mall-like shopping, hotels and restaurants, the Braves have followed in the footsteps of a handful of other professional sports teams in the effort to build a destination built with more than just the game in mind.

By building up the surrounding area to the stadium, the Braves have successfully constructed a place for consumers to use all year long whether they come to Braves games or not.