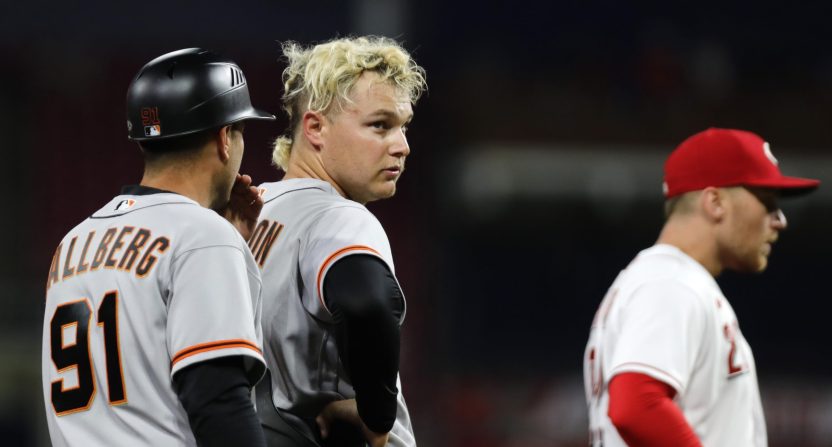 Fantasy football disagreements aren’t just for us normies. Even Major League Baseball players get into them. And on Friday night, this one led to a pregame slapping.

Cincinnati Reds outfielder Tommy Pham and San Francisco Giants outfielder Joc Pederson got into it before their game on Friday during batting practice and Pham slapped Pederson across the face.

This is all I could see. pic.twitter.com/wUPN4VSvjt

Andrew Baggarly and C. Trent Rosecrans of The Athletic described the “Will Smith-style” slap as one that stems “from a disagreement the two had in a fantasy football league including players from several teams.”

The Reds announced that MLB is investigating the incident while the Giants reportedly requested Pham be removed from the game. Pham then agreed not to play pending the results of the investigation and was scratched before the rain-delayed game got going.

Tommy Pham is out of the lineup because MLB is investigating the pregame incident. Pham agreed not to play tonight pending the result of MLB's investigation.

Pederson didn’t let the slap ruin his evening and he went 1-for-3 with an RBI and HBP, though the Reds won the game 5-1.

Afterward, Pederson spoke with reporters about the incident and provided his side of the story.

Joc shares details of what happened in his fantasy football league that started his altercation with Tommy Pham today pic.twitter.com/d9NBTwPVoG

“Yeah, that happened. That was the only physical part,” said Joc when asked if Pham has slapped him.

“We were in a fantasy league together,” Pederson explained. “I put somebody, a player, on the injured reserve when they were listed as out and added another player. And then there’s a text message in the group saying that I was cheating because I was stashing players on my bench. And then, I don’t know, I looked up the rules and sent a screenshot of the rules, how it said that when a player is ruled out, you’re allowed to put him on the IR and that’s all I was doing.

“It just so happened that [Pham] had a player, Jeff Wilson, who was out, and he had him on the IR and I said you literally have the same thing on your bench. And I guess he was in two leagues and in one of them he was on the IR and one of them he wasn’t. So maybe that was a confusion. But on the ESPN league that we’re in, he was listed as out. So it feels very similar to what I did. That was basically all of it.”

Pederson says that he hadn’t spoken to Pham other than in the league group text and that the issue was “over a year ago.”

“There was no argument,” said Pederson when asked about Friday’s incident. “He kinda came up and said ‘you remember from last year?’ And I’m like, fantasy football?”

Pederson doesn’t say how things escalated from a year-old fantasy football grudge to a slap in the “cheek,” but he did add that “I don’t think violence isn’t the answer so I…left the situation.”

“It was an unfortunate situation over a fantasy football league rule…wasn’t a rule.”

We’ll have to see what Pham says to explain why he needed to resort to physical violence over a random fantasy football transaction.