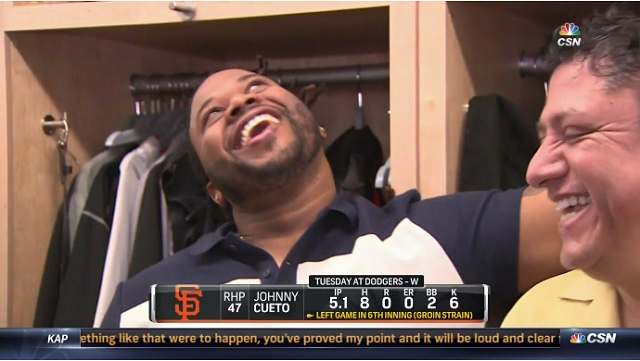 The San Francisco Giants got a much-needed 2-0 victory on Tuesday night over the Los Angeles Dodgers to move into a three-way tie (!) with the New York Mets and St. Louis Cardinals for the two NL Wild Card spots. However, the win didn’t come without some rough news for the Giants, and what would you expect with how awful things have gone for them in the second half?

Starting shortstop Brandon Crawford suffered a dislocated left pinkie finger and is likely to miss at least one game:

MRI for Cueto tomorrow. Crawford day to day, but Bochy said he expects Adrianza to play some SS.

But the bigger injury concern is in regard to starting pitcher Johnny Cueto. The Giants’ right-hander was cruising along on Tuesday night, before looking noticeably uncomfortable on the follow-through of a couple pitches. The Giants’ trainer came out and Cueto took a few warm-up pitches that still looked uncomfortable, but he said he was okay to stay in. But, his next two pitches were very off, resulting in a walk, and Cueto motioned back to the dugout that he was done.

The Giants diagnosed Cueto with a left groin injury, and he’s getting an MRI tomorrow. A groin injury for a pitcher can be very annoying and turn into a multiple-week absence even if it’s just a typical strain. But, Cueto was still in good spirits in the postgame and laughed when explaining to his translator what the injury felt like:

It’s the very first time I’ve experienced that injury. I’ve never felt that before. It was like a crab just grabbing me there and biting me.

Well, that doesn’t sound good, but at least Cueto has a sense of humor about it.

The Giants, however, will not be laughing if Cueto has to miss any starts, and especially if it’s an injury that could put his postseason status in jeopardy. Cueto would’ve likely been the team’s Game 1 starter in the NLDS, as Madison Bumgarner would surely start the Wild Card Game. But the Giants just need to worry about getting to the postseason first, and with every remaining game crucial, a Cueto missed start or two could prove to be a killer loss.