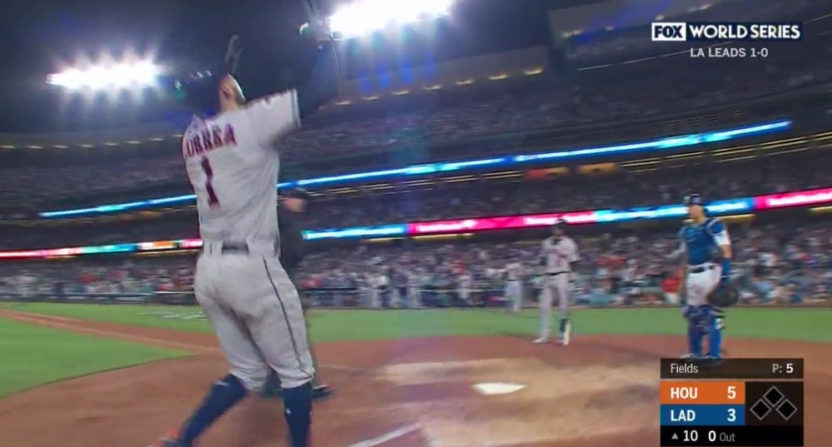 Heading into the eighth inning of Game 2 of the World Series Wednesday night, things looked pretty bad for the Houston Astros. They trailed the Los Angeles Dodgers 1-0 in the series and 3-1 in the game, and it looked like they might have to head back to Houston down 2-0. But Alex Bregman hit a ground-rule double (as his fly ball bounced into the stands off the glove of a diving Yasiel Puig), Jose Altuve advanced him on a ground out to second base, and a Carlos Correa single drove him in, pulling the Astros within one. After that, a Marwin Gonzalez home run in the ninth sent the game to extra innings, and then in the top of the 10th, Altuve and Correa hit back-to-back solo home runs off Josh Fields to put Houston up 5-3. Here’s Altuve’s:

After that, though, Puig responded with a solo shot of his own in the bottom of the 10th to make it 5-4. Ken Giles then struck out Yasmani Grandal and Austin Barnes to get within one out of ending the game, but things got worse for Houston from there. Giles then walked Logan Forsythe and threw a wild pitch to Kiké Hernandez, advancing Forsythe to second, and a Hernandez single to right field then tied the game.

The Astros got out of the inning once Chris Devinski came in (after a botched pickoff attempt that hit the second-base umpire, Devinski got Chris Taylor to fly out to center field), though, and the Altuve and Correa home runs still wound up being important. Houston won 7-6 in the 11th thanks to a Cameron Maybin single and a George Springer home run. And they were certainly a cool moment in this one.