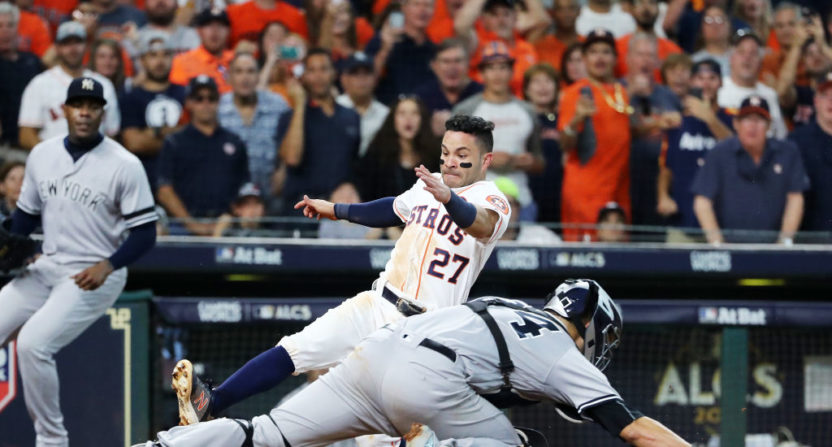 Sometimes in the playoffs, the heroes are roles players or reserves who delight us with out-of-nowhere performances that remind us anything can happen in baseball.

And sometimes, the heroes are exactly who you expect them to be.

The Astros beat the Yankees on Saturday in Game 2 of the ALCS because Jose Altuve, Carlos Correa and Justin Verlander played like the All-Stars they are.

After Verlander shut down the Yankees for nine innings, striking out 13 batters and making New York hitters look foolish, Altuve and Correa did the rest. With one out in the bottom of the ninth inning and Yankees closer Aroldis Chapman on the mound, Altuve singled to center field for his second hit of the day. One batter later, Correa double to right-center, sending Altuve racing around the bases. When Aaron Judge’s throw went to second base, Altuve rounded third and headed home, and when Gary Sanchez failed to catch a relay throw from Didi Gregorius, Altuve slid in with the game-winning run.

There has already been plenty of debate over who on the Yankees was to blame for the game-ending play. You could argue it was Judge for throwing to the wrong base, Gregorius for bouncing the throw or, obviously, Sanchez for not corralling the ball. But let’s stop for a second and recognize the incredible skill on display by Altuve and Correa. Altuve, the likely AL MVP, is now batting an incredible .565/.630/.957 this postseason and showed Saturday that his legs are as impressive as his bat. Correa, who drove in the Astros first run of the day with an opposite-field home run, has been whacking line drives throughout the playoffs.

Overall, Saturday’s game was a pleasure, from Josh Reddick’s defense, to a bizarre ground-rule double to Verlander’s remarkable outing to Altuve and Correa’s heroics. With the Astros leading the series 2-0, the teams will take the day off Sunday before resuming on Monday. If that game is anywhere near as tense and exciting as Saturday’s, baseball fans everywhere have much to look forward to.