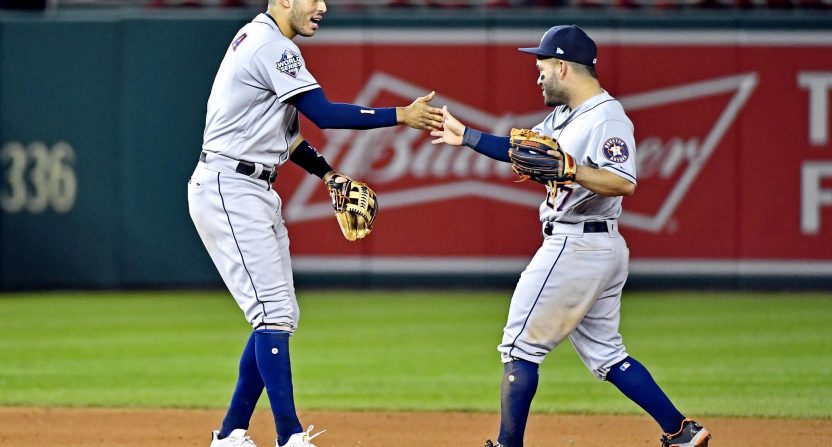 Rightfully, a lot of people have been piling on as members of the Astros’ ownership, staff, and lineup either attempt to pass the buck, play down the effect, deny they did it, or just stay quiet and hope it all goes away. Members of the media and fellow MLB players have all gone on the offensive to take down the Astros for not only cheating but for the way they’ve handled the aftermath.

One such player is the reigning National League MVP, Los Angeles Dodgers’ centerfielder Cody Bellinger. Bellinger didn’t hold back recently, calling Astros owner Jim Crane’s apology “weak” and saying “[Jose] Altuve stole an MVP from [Aaron] Judge in 2017. Everyone knows they stole the ring from us. But it’s over.”

That appeared to cross a line for Astros shortstop Carlos Correa, who sat down with MLB Network for an interview on Saturday and said, per The Athletic, that people like Bellinger don’t know what they’re talking about. While he did once again admit that the sign-stealing was “wrong,” he then went off on all the reasons why everything else that people seem to think about the scandal was incorrect (somehow?).

Along with defending the Astros’ World Series championship and saying people are misinformed about when the cheating happened and how much it impacted games, Correa seemed the most heated about anything directed in Altuve’s direction. He even went as far as to say that when Altuve would hear the trash can banging that acted as a signal to Astros’ hitters, the 2017 AL MVP would refuse to participate.

The most damning evidence against Altuve is footage of him running towards home plate after hitting the home run that sent the Astros to the World Series in 2017. He gestures to his teammates not to pull his shirt off because of something underneath, presumably a wire that was tipping him off to pitches. He even goes as far as to hold his shirt tight to prevent anyone from opening it. He also seems to be telling his teammates that he has something on underneath his shirt.

The Houston Astros are just absolute scumbags. We all know they also used buzzers & they lied about that today. They also didn't show enough remorse & the owner made absurd comments…

“…he doesn’t want me to talk about this but I’m going to say it…he’s got an unfinished tattoo on his collarbone, that honestly looks terrible. It was a bad tattoo and he didn’t want nobody to see it. He didn’t want to show it at all.”

So, uh…we’re gonna need to see that tattoo, buddy.

When Carlos Correa says a crappy tattoo was why Altuve wouldn’t take his jersey off pic.twitter.com/lSmAWNYSko

Would be funny if Altuve had to rush to a tattoo parlor today to go get an ugly tattoo https://t.co/IfyUMVzxd3

JOSE ALTUVE: Wait, what did you say?

CARLOS CORREA: You need to get a bad tattoo.

CARLOS CORREA: You kinda hafta now. On your collarbone. A really shitty one.

So Altuve’s first excuse for not taking off his jersey was that his wife would be upset. Now Carlos Correa is saying it was because of an unfinished tattoo. Baseball needs to reopen its investigation now.

So now we wait. Either Jose Altuve is going to magically show up with a collarbone tattoo that doesn’t seem to have existed six months ago or, and hear us out on this, that’s just more bullshit.

But hey, if you can’t trust the Houston Astros, who can you trust?