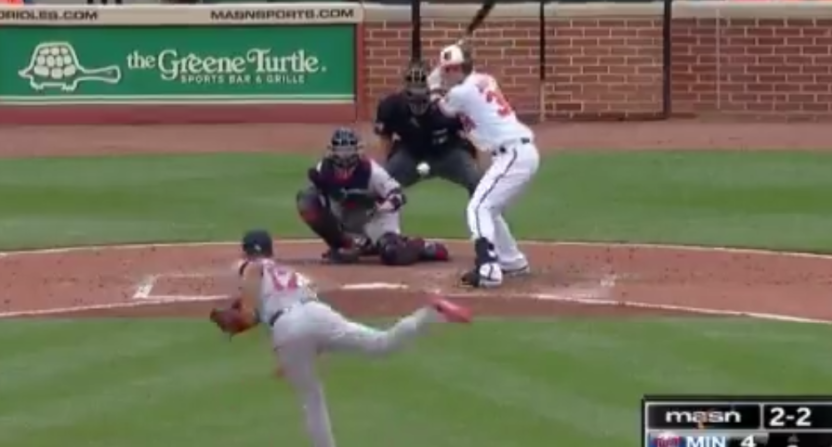 Earlier this week, Sports Illustrated ran a big Tom Verducci article on the prominence the curveball has gained in the last few years, becoming more and more a part of many pitchers’ arsenals and of teams’ overall strategies. Twins’ second-year pitcher Jose Berrios wasn’t one of the many pitchers interviewed for that article, but he has one of the most impressive curves out there, and he put it to great use in Minnesota’s 4-3 win over the Baltimore Orioles Wednesday. Berrios allowed three runs and four hits over six and a third innings, striking out seven. Some of those strikeouts came on absolutely filthy curveballs, like this one against Caleb Joseph:

Or this one, on Mark Trumbo, where Berrios went curveball-sinker-curveball:

Or these three against Trey Mancini:

It’s amazing watching how those curveballs move, and how fooled batters are by them. They’re a big part of what’s been working for Berrios this year, too. SI’s Michael Beller noted recently that this is quite the turnaround for Berrios, who struggled in both of his stints at the major league level last year. But he’s been great so far this year, posting a 1.66 ERA with 9.14 strikeouts per 9 innings and just 1.66 walks per nine over that span, giving him a Fangraphs WAR of 0.7 already. As Deadspin’s Emma Baccellieri writes, much of this success from Berrios is thanks to improvements in his curveball’s location:

His curveball has always been one of his strengths, but it’s been better than ever in his last few outings. While he’s been getting more and more guys to chase it—47 percent of batters are swinging, as compared to 37 percent last year—he’s seen fewer and fewer make contact. Until today, Berrios had yet to give up a hit on his curve after throwing it more than 50 times in his first two starts. That’s in large part because he’s been locating it so well. He’s managed to throw the pitch almost exclusively on the outside corner so far, unlike last year, when he often saw it get away from him.

Of course, things still aren’t perfect for Berrios. Of the four hits he allowed Wednesday, three were solo home runs, and two of those were thanks to mislocated curveballs. But When his curveball is going where he wants it, there are very few people who can hit it. That fits in with what Verducci wrote about how the curveball is becoming more and more of a frequently-used pitch and a strikeout:

“The data is showing, if the curveball is your best pitch, use it more often,” says manager John Farrell of the curveball-mad Red Sox. “It used to be that if you threw less than 60% fastballs, you were not going to start. That’s gone out the window.”

Says [Houston pitcher Lance] McCullers, “I don’t view my curveball as complementary stuff. Whereas old school was more like, ‘No, establish the fastball, pound the heater and wait until they prove they can hit it.’ Well, what if I have two guys on and I’m trying to establish my heater, and he hits it out of the ballpark? You saw it in the postseason: Now it’s about pitchers challenging guys with their best pitch, and that means a lot of curveballs.”

…To understand this change in traditional pitching principles, just watch McCullers when he reaches a full count on a hitter. The full count is the batter-pitcher matchup pushed to its limit. It used to be the baseball equivalent of a Dodge City showdown at high noon. It was the time for a pitcher’s best heat, and both sides knew it.

This year McCullers has thrown 42 full-count pitches—and 35 of them have been curveballs. Hitters are 2 for 21 against curves that ended those at bats. “This is my best pitch,” he explains, “and this is what I’m attacking you with.”

That certainly holds true for Berrios too. If he can keep successfully attacking batters with the curve the way he did Wednesday, he may find a lot of major-league success, and make a lot of opponents miserable in the process.