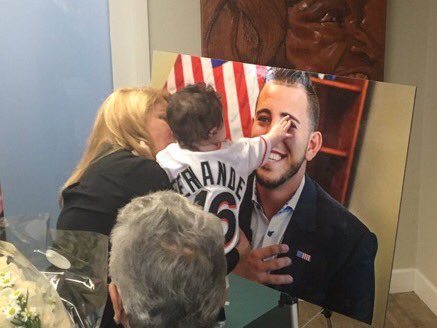 Monday marked the 25th birthday of former Miami Marlins ace Jose Fernandez, who died last September in a boating accident off the coast of Florida.

To celebrate the occasion, the Marlins invited Fernandez’s family to watch Monday’s game against the Nationals at Marlins Park. That invitation extended to the youngest member of the Fernandez clan, the pitcher’s five-month-old daughter Penelope, who delighted the players who knew her father.

Via the Miami Herald:

Dee Gordon entered the Marlins clubhouse on Monday holding a crying infant, walked her over to Jose Fernandez’s old corner locker, and showed her the uniforms and cleats that belonged to the father she’ll never know.

Penelope, the late pitcher’s five-month-old daughter, was wearing a miniature version of his uniform with “Fernandez” written across the back. Players stopped what they were doing to watch the scene unfold.

“She is beautiful,” said Marlins infielder Miguel Rojas. “She has the same face as Jose. Even the hair. Kind of the messy hair like his when he came out of the showers. That’s a little piece that we kind of need to remember him. This is a little piece of Jose in this world.”

“I was hitting in the cage and Dee brought her in,” Rojas said. “I wasn’t expecting her at all. Right away, a lot of emotions. [Marcell] Ozuna was hitting in the other cage. We stopped what we were doing. It was really cool to see her and remember Jose.”

“It was great seeing that little girl,” Mattingly said. “Just a reminder, also, of last year…”

Fox Sports Florida got some footage of Penelope, born months after Fernandez’s death, taking in the sights of Marlins Park with her mom (and Fernandez’s girlfriend) Maria Arias:

If that didn’t melt your heart, try these photos:

Jose Fernandez's 5-month old daughter Penelope reaches out for photo of him. This breaks my heart ⚾️?❤ pic.twitter.com/LvM7yiTvQF

Many Marlins players who were close to Fernandez posted on social media Monday about his birthday.

The stars belong in the sky,
To shine down on us to admire
And that is where you are my friend
#joseday #jdf16 #hbd pic.twitter.com/xh1pIv2IjW

Fernandez has been gone for 10 months, but his death still feels almost abstract. Penelope’s day at Marlins Park reminds us how real—and how tragic—it was.