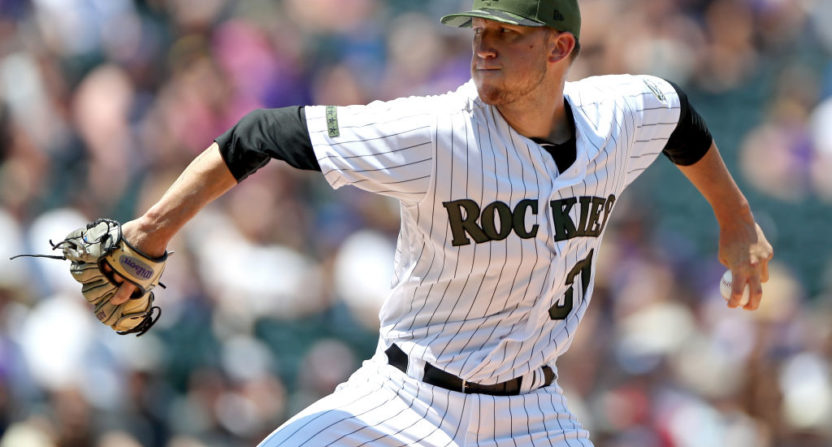 Pitching well at the Colorado Rockies’ home park of Coors Field is incredibly difficult, given the field’s altitude and giant dimensions. Through Saturday, it ranked as the best hitters’ park in baseball in 2017 as per ESPN’s runs-scored park factor, and earlier this year, it tied Fenway Park’s record for cycles hit there despite the Boston ballpark’s 83-year head start. Throwing a no-hitter there might be even more difficult, especially given how much room there is for singles to drop; there are 1.179 the amount of hits at Coors than there are on the road this year, also the highest in baseball. And that was illustrated again Sunday when the Rockies’ Kyle Freeland took a no-hitter into the ninth inning against the White Sox, only to have Chicago left fielder Melky Cabrera break it up:

There’s only been one no-hitter at Coors Field since the stadium opened in 1995, and that came from visiting pitcher Hideo Nomo of the Dodgers back in 1996. There are parks that have never recorded a no-hitter, but all three opened more recently; Busch Stadium (2006), the new Yankee Stadium (2009), and Target Field (2010). Freeland came exceptionally close here, only missing by two outs, but he needed incredible help to get that far, especially from this Gerardo Parra catch in the eighth:

Gotta have some help. Freeland is 3 outs away from a no-hitter!

That’s an amazing catch off Yolmer Sanchez, with Statcast estimating that ball drops for a hit 84 per cent of the time:

For you fans of such things, Statcast had the hit probability on Sanchez' out at 84%.https://t.co/l7p5MRhsxh

Even with that, though, Freeland couldn’t quite hang on. The rising pitch count may have had something to do with that; he was up to 126 when he was pulled after Cabrera’s hit. But he still had a great game, pitching eight and a third innings with just the one hit and three walks, plus nine strikeouts. And he’s having a solid rookie season, posting a 3.77 ERA with 5.45 strikeouts per 9 innings and a 1.47 strikeout/walk ratio in 99 innings before Sunday’s game. The talk of maybe moving him to the bullpen might take a hit after this too (although that’s more about the workload he’s had so far). In any case, though, this certainly demonstrated just how hard it is to pitch a no-hitter at Coors Field.