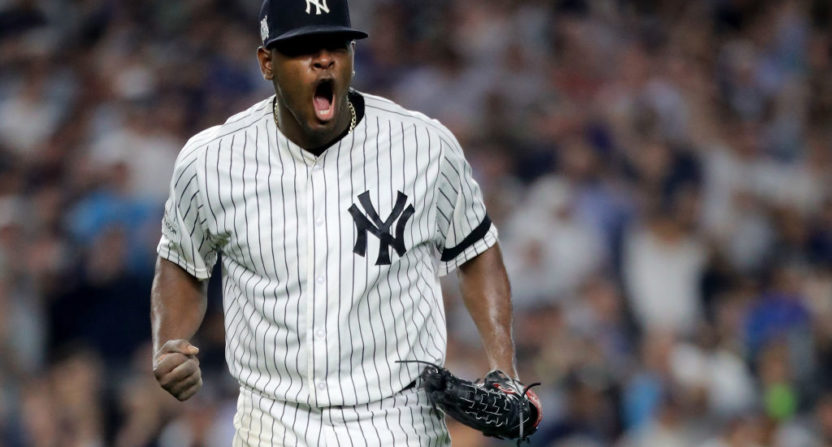 Weekend traffic at Disney World affects even major league baseball players. New York Yankees starter Luis Severino arrived later than expected for a split-squad game against the Atlanta Braves at Champion Stadium (the Braves’ spring training stadium, at the ESPN Wide World of Sports complex on the Disney World grounds), and as per Ken Davidoff of The New York Post, Disney traffic appears to be to blame:

Perhaps the most important lesson Luis Severino learned Saturday covered not baseball, but Disney World: It’s vast and confusing, and weekend traffic is a doozy.

The Yankees’ Opening Day starter reported to Champion Stadium about 11:45 Saturday morning, considerably later than expected for a 1:07 first pitch, though he stayed in the area Friday night. The Yankees could shrug it off given the circumstances, and it helped the right-hander that he proceeded to clock a solid five innings in the Yankees’ split-squad, 8-3 victory over the Braves.

“I guess he went to the wrong place [on Disney grounds],” Yankees pitching coach Larry Rothschild said. “That’s not a good thing, but we won’t have that problem during the year.”

“It was supposed to be 15 minutes [from where he stayed],” said Severino, who made the trip to Disney because the Yankees wanted to keep him away from the Blue Jays, whom he’ll face Thursday in the season opener, in the split-squad contest. “It was 30 minutes. I meant to check the traffic before.”

It all worked out fine for Severino, though. He allowed just two hits, two walks and two runs through five innings against the Braves while striking out seven. And he finished strong. After allowing an Ozzie Albies home run in the fourth and walking the next two batters, he settled down following a mound visit from Rothschild, and retired the final six batters he faced, striking out five of them.

Severino is all set for his Opening Day start against the Blue Jays Thursday, and said his experience in the postseason last year will help out there. Fortunately for him, Thursday won’t involve any complications from Disney traffic. And Yankee Stadium should be a little easier to find.