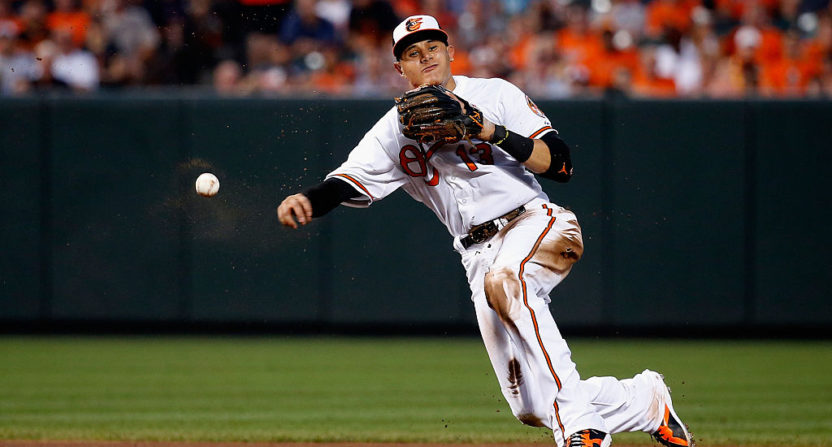 Manny Machado is probably the best Orioles player of this century. He’s a defensive whiz at third base (and shortstop, when necessary) and a three-time 30-home run hitter at the plate. Six years into his career, he has reached three All-Star Games, finished top 10 in MVP voting three times and won two Gold Gloves. Since his first full season in 2013, he has been the seventh-best player in baseball, per FanGraphs.

And yet… Baltimore needs to trade him ASAP.

Machado will be a free agent after the 2018 season, at age 26, and Ken Rosenthal has suggested his contract could push $400 million. With that in mind, there are only two reasons for the Orioles to hold onto their star: 1.) They plan to pay him that massive deal, making him one of baseball’s highest paid players. 2.) They think they can compete for a World Series title in 2018.

Let’s start with Baltimore’s chances of re-signing Machado. The Orioles spent about $182 million on player salaries in 2017, per Sportrac, the highest figure in franchise history. For argument’s sake, let’s say they plan to keep payroll in that range for the near future. Chris Davis will make $21 million a year through 2022, meaning that if they sign Machado for, say, $35 million a year they’ll have more than 30 percent of their payroll for several seasons tied up in only two players. That’s before considering the money it might cost to hang onto any of Zach Britton, Jonathan Schoop, Dylan Bundy and Kevin Gausman and the funds it would take to build a winning team around that core.

With few promising prospects on the way to provide cheap value, the economics don’t look good. Resigning Machado for the money he’ll want could hamstring the team’s payroll for years to come. Engaging in a bidding war with the Yankees, Red Sox and Phillies seems like a poor idea.

Of course, just because Machado will likely leave Baltimore after next season doesn’t mean the Orioles have to deal him. General manager Dan Duquette could keep him around in hopes of squeezing one more playoff appearance from this Machado/Davis/Adam Jones core. Baltimore has reached the playoffs three times in the past six years, and it’s tempting to go all-out one more time.

But looking at the Orioles’ roster, it’s difficult to see a 2018 playoff team. Last season’s Baltimore squad dipped to 75-87, and there’s little reason to expect a 15-win improvement. Sure you can imagine Machado, Davis, Mark Trumbo and Kevin Gausman bouncing back from down years, but you must similarly project Trey Mancini, Jonathan Schoop and Wellington Castillo to fall back after career-high output in 2017. An optimist might see the Orioles improving from a below-average offensive team back to the strong one they were earlier this decade. But even the cheeriest glass-half-full believer would have a tough time viewing this pitching staff (fourth worst ERA, third worst FIP in baseball last year) as anything but a deficiency.

The Orioles’ only hope to become a genuine contender might be making a splash in free agency, but given their franchise-record payroll, that won’t be easy. So far this offseason, they have been linked mostly to rotation-filler types like Lance Lynn, Jason Vargas and Andrew Cashner. None of those guys would drastically alter the team’s course.

With the Yankees and Red Sox gearing up to dominate the AL East in the near future, the Orioles’ best-case scenario next season is probably something like 86 wins and a berth in the Wild-Card Game, and even that might be a stretch. Going all out for 2018 glory seems like a recipe for disappointment.

The Orioles will reportedly wait until later in the offseason to discuss an extension with Machado, talks that will almost certainly go nowhere. Meanwhile, teams around baseball will fill their third-base voids with free agents Mike Moustakas, Todd Frazier and Zack Cozart or trade chips such as Josh Donaldson. If the Os fail to extend Machado (as they likely will), the market for him later this offseason could be greatly depressed. It’s easy to find teams that might bid on a year of Machado — the Yankees, Cardinals, Rangers, Giants and Brewers could all be potential fits — but that list will shrink as the offseason rolls along.

That’s why Baltimore shouldn’t wait. If the team can’t sign Machado next offseason and won’t win a World Series (or even a division title) next year, Duquette should cut bait now. Sure, the return might not be franchise-changing for a one-year rental, but it will be even weaker if the Os wait until the Trade Deadline in July. Now is the time.

It’s always painful to trade a franchise icon, from both a baseball perspective and a public-relations one. But you know what’s even more painful? Letting that star walk for nothing but a compensation pick and being forced to face a scary rebuilding process without him. Manny Machado won’t be part of the next Orioles playoff team. It’s time to move on.