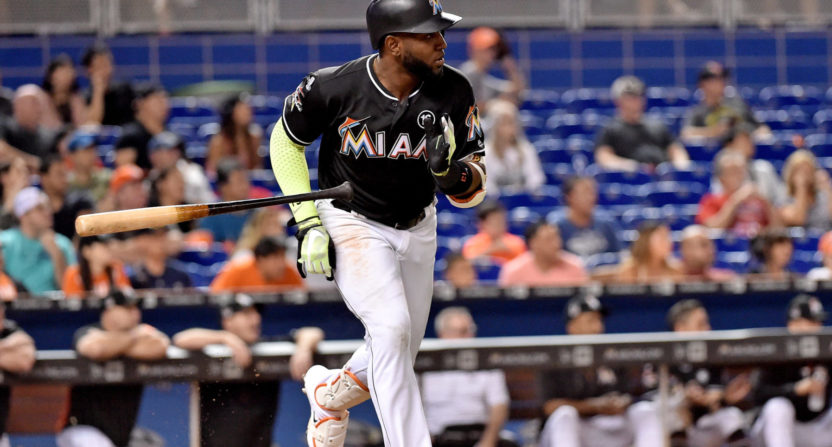 Now that the Miami Marlins have finished trading away Dee Gordon and Giancarlo Stanton, Derek Jeter and company are hurriedly seeing which other stars they can deal away.

According to multiple reports Monday night, next on Miami’s list is Marcell Ozuna, the 27-year-old All-Star outfielder coming off a breakout season. Ozuna is two years away from free agency, and the Marlins are far more than that away from contention, so the team has little reason to keep him (aside from giving  its few remaining fans something to root for, which clearly is not a priority). The Athletic’s Ken Rosenthal reports the Marlins have told teams Ozuna will come cheaper than fellow outfielder Christian Yelich, who is further from free agency.

#Marlins pushing Ozuna, telling teams he will be easier to acquire (lower acquisition cost) than Yelich. Two years of control for Ozuna, five for Yelich.

So where might Ozuna land? Well seems a lot of teams are in the market for a young, affordable outfielder coming off a season in which he hit .312/.376/.548 with 37 home runs. MLB.com’s Joe Frisaro reported Monday evening that the Nationals, Giants and Cardinals are interested in Ozuna, and the Mets, Red Sox and others could be sensible destinations as well.

There’s a whole lot to like with Ozuna. He has huge power (even if you doubt the sustainability of his 2017 batting average), and though he’s best suited as a left fielder, he can play center as well. Meanwhile he’s right in his prime and comes with a cheap arbitration-determined salary. Outside of the Yankees with their newly loaded outfielder, it’s hard to come up with a contender that couldn’t find room on its roster and its balance sheet for Ozuna.

Of course, high demand will mean the Marlins can ask for a hefty package of prospects in return, potentially stocking their farm system through this trade in a way they didn’t in the Stanton move. Whereas dealing Giancarlo meant saving money, maybe selling off Ozuna will mean collecting assets. Miami fans will be (justifiably) angry to see yet another highly watchable star head out of town, but maybe their team can get some good baseball players out of it.