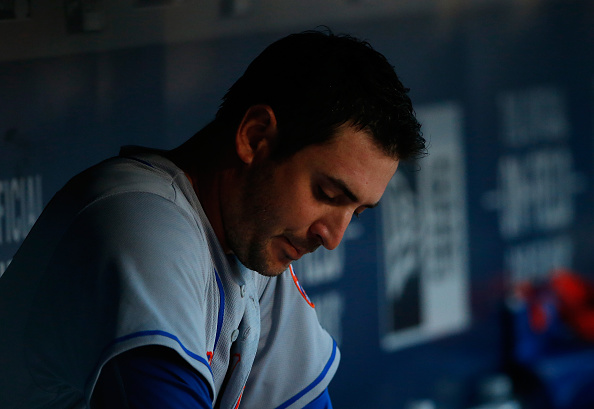 Matt Harvey has struggled mightily this season. Once the top option amongst the best starting five in baseball, the Mets starter is mired in arguably the worst stretch of his career. Harvey is 3-6 and his ERA has ballooned to 5.77 after he allowed nine runs in 2 2/3 innings in the worst start of his career last time he took the mound.

With their star struggling, the Mets front office gave Harvey the option of skipping his next start in order to get his stuff sorted out. However, Harvey is having none it.

“Obviously it’s frustrating being out there right now when you’re not doing well and not helping the team,” Harvey told ESPN.com on Monday afternoon. “As a teammate, your objective is to do everything you can to win games and help us succeed. And I wasn’t doing that. So, obviously, they gave me an option to be skipped or whatnot and really try to figure things out. For me, taking time off isn’t going to do anything. It’s finding it on the mound.

“I’m not a quitter. I’m not going to just quit and put the ball down. It’s a fight. It was good for me to do that.”

Harvey will instead take the mound tonight in almost the exact same situation as his last start on May 19. However, this time he will be in a hostile environment as he squares off against the Nationals and their ace, Stephen Strasburg, in Washington.

Time will tell if this is the right move, but manager Terry Collins is in full support of Harvey’s decision.

“Nobody is more frustrated than him. He said, ‘I’m not backing away from this.’ A lot of guys would have taken that out. He had a shot to. He could have said, ‘I need to get away from this.’ But he didn’t. He just said, ‘I’ve got to get back out there and I’ve got to pitch. That’s the only way I’m going to get through this.’ I thought that was the most impressive part of it.”

Harvey threw a pitching session on the mound at Citi Field on Saturday, which allowed the team to use its TrackMan system to evaluate Harvey’s motions as he pitched in a game-like setting. For Harvey, the results were encouraging. He told ESPN he felt his throwing motion on his final 20 pitches was consistent and comfortable.

Two days later, Matt Harvey has taken to the mound to throw what appears to throw a simulated inning or two. #Mets pic.twitter.com/YYoITVcKa7

The Mets have struggled to determine what exactly is wrong with their star pitcher, even going so far as to suggest burning some of his personal effects in effigy.

The Mets considered every cure for Matt Harvey. That included setting his belongings on fire https://t.co/Gzw8e4DC17 pic.twitter.com/BDfcZivY3n

However, the real answer might just be dumb luck. Harvey’s fielding-independent pitching numbers (which estimates ERA based on strikeouts, walks, and home runs allowed) suggest he has been pitching much better than his traditional line would suggest. His FIP is 3.62 this season, more than two runs lower than his ERA.

And although his strikeout rate is down and his walk rate is up from 2015, his BABIP (batting average on balls in play) is nearly .100 points higher than his career average of .288. Harvey has not quite pitched to his previous levels, but he did not suddenly turn into Jeremy Guthrie either.

Harvey probably has the right idea. As long as his mechanics are fine, he should pitch through this rough patch and let regression to the mean take its natural course.