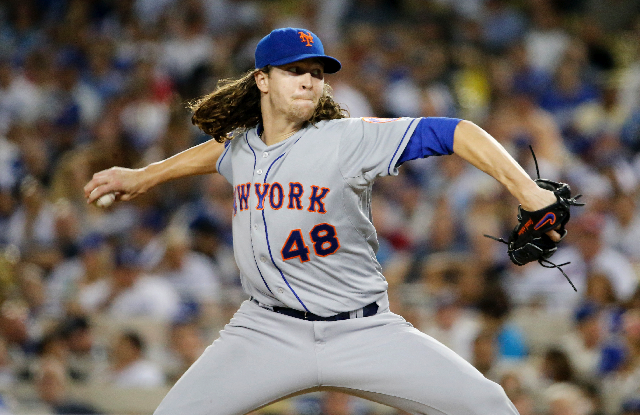 MLB teams typically manage their pitching staffs differently in the postseason than regular season. But that could change for at least a handful of clubs next year.

During the regular season, starting pitchers are often expected to throw six to seven innings in a ballgame. That’s especially true for ace starters who anchor a pitching staff or even back-of-the-rotation veteran “innings eaters” who contribute 200-plus innings to their respective staffs. It’s surely not a coincidence that the best pitchers in MLB log the highest inning totals throughout a season. (The Cy Young Award favorites in each league this year, Chris Sale and Max Scherzer, both threw 200 or more innings.)

In the postseason, however, a starter might go five or six innings. Every pitch matters, each inning is high-leverage, the opposing lineup is one of the best in baseball. A far greater importance is placed upon how many times a pitcher will go through that batting order. And the data has made it pretty clear for a number of years that pitchers can successfully go through a lineup twice. After that, a team is flirting with danger. The pitcher will have tired out, throwing with less velocity or movement. The batters will be more familiar with a pitcher’s repertoire.

So starting pitchers will get yanked after that second turn through the batting order. Even Clayton Kershaw got pulled after six innings in Game 5 of the NLCS despite only allowing one run and three hits on 89 pitches. Dodgers manager Dave Roberts, who is probably as firm a believer in getting his pitcher out of there before trouble develops, wasn’t going to take a chance.

We haven’t seen that approach as much during the regular season, but a couple of MLB teams are going to try and reduce the burden on their starting pitchers in 2018. One of them is the Tampa Bay Rays, who tried to implement a scheme like this two seasons ago but it was met with resistance. Starters didn’t like getting pulled from games, especially if it happened before the five innings necessary to get a win. And relievers needed convincing that pitching in the middle innings was just as important as the eighth and ninth innings where top set-up men and closers get the glory (and saves).

It probably shouldn’t be a surprise that the New York Mets are another team looking to change how they use their starters, considering how injuries decimated their pitching staff this past season.

Mets general manager Sandy Alderson has been rather vocal in recent days about how they will handle their pitchers next season, which also many explain why the team decided to hire Mickey Callaway — previously the pitching coach for the Indians — as its new manager.

Jacob deGrom was the only Mets starter who logged 200 innings last season, while only three pitched 100 or more frames. Those three pitchers — Robert Gsellman, Rafael Montero and Seth Lugo — weren’t even expected to be in the rotation going into the season. But with Noah Syndergaard, Matt Harvey and Steven Matz each suffering serious injuries, the Mets had little choice other than to give other starters a chance.

The Mets have starting pitching depth on their major league roster, which helped them get through a tough 2017 season in which they lost 92 games. But Callaway will be able to take better advantage of that depth if most of the staff stays healthy during the season, and changing how the team handles starting pitchers will be a big part of that. The emphasis will be on closely monitoring pitchers after they’ve gone through an opposing lineup twice.

Naturally, reducing the workload on starters means that more will be asked from the staff’s relievers. As a result, Alderson plans to prioritize relievers on the free agent market in addition to a durable starter who can shoulder a lot of innings at the back of the rotation. According to Newsday‘s Marc Carig, the Mets will likely look to carry eight relievers in their bullpen. (And with one fewer bench spot, the team will also value positional versatility among its reserves.)

Fortunately for the Mets, they already have a closer in Jeurys Familia, while Gsellman and Montero can be long relievers who can swing between the rotation and bullpen. So Alderson can focus on pursuing middle relievers, who typically aren’t as expensive, and plenty of them are available in free agency. As Carig notes, Alderson may have to get over his reluctance to give relievers longer contracts to get better middle relievers and set-up men.

How many other clubs may be considering similar plans for the 2018 season? Naturally, that decision could vary from team to team. The Mets and Rays are both strong at the top of their respective rotations and could give their bullpens a break when Syndergaard or Chris Archer is on the mound. Other teams lacking ace starters may wear out their relief corps quickly. But if the Mets and Rays are able to stick to the plan and are successful with it, plenty of MLB teams will surely follow their lead.