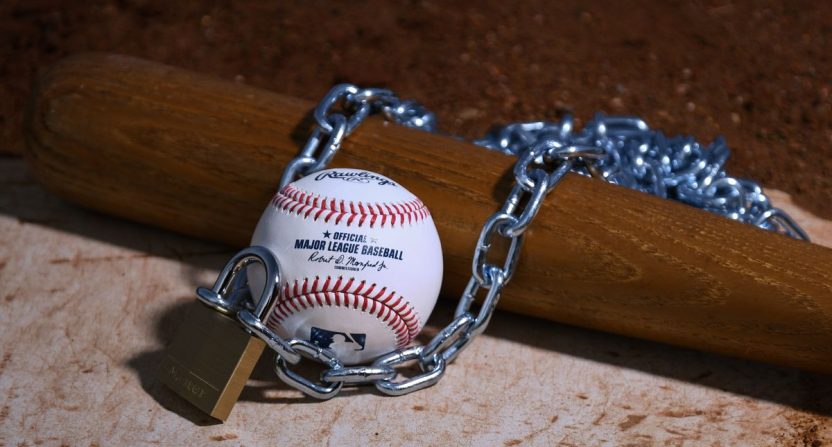 One of the biggest ongoing sports stories has been the MLB lockout and the inability for the MLB and the MLBPA to come to terms on a new labor deal, which meant the cancelation of some 2022 games.

Negotiations had been going on dating back to December, with seemingly very little progress coming from both sides. This has led to some of the biggest names in baseball, such as Mike Trout, Max Scherzer, and Noah Syndergaard speaking out, amongst many others asking for a return to baseball.

It seems that we have reached a resolution. Thursday afternoon, reports started trickling out that the MLB and the MLBPA have finally come to an agreement and we will see baseball return in April after all.

BREAKING: Major League Baseball and the MLB Players Association have reached a tentative agreement on a new labor deal, sources tell ESPN. While it still needs to be ratified by both parties, that is expected to be a formality, and when it is:

This has obviously gotten the MLB world talking with everyone letting their excitement of these reports be known on social media.

We will have @Reds baseball on WLW soon! https://t.co/YsUKUEv8F3

The players union accepts the deal and once owners agree, which is a formality, it’s official. Opening Day is April 7

MLB and the Players Association reached a tentative agreement to end the lock out and salvage a #MLB full season! pic.twitter.com/md74Pkj93D

Players will reportedly be able to report to spring training as early as Friday, with Opening Day expected to take place on April 7.

Players can report to spring-training camps as early as tomorrow. Opening Day is expected to be April 7, as @JesseRogersESPN first reported. Transactions unfreeze upon ratification, which is expected to come as early as today, meaning free agents can sign and trades can occur.

Once the deal is ratified by both sides, which is expected to happen either Thursday or Friday, free agency will be underway and trades will be allowed to take place. This will likely be a crazy weekend as every team will surely be rushing to sign free agents in a hurry, something that MLB fans are even more excited to see.

With free agency set to re-open, we are about to find out how good MLB agents and teams are at tampering. Good luck to all involved parties.

This means that the MLB’s free agency period will occur at the same time that NFL free agency is going on. That is truly unprecedented and has many eager to see the fireworks that will happen.

Not only is baseball back, but we now get MLB free agency, NFL free agency and the start of NCAA tournament in the next week.

An ELECTRIC time on the sports calendar coming up.

NFL and MLB will now have simultaneous frenzied free agency.

With both sides looking like they were not budging on negotiations, it seemed very improbable that there would be a deal reached this quickly. Credit is deserved to both the MLB and the MLBPA for figuring out terms on a deal that means baseball is indeed back.