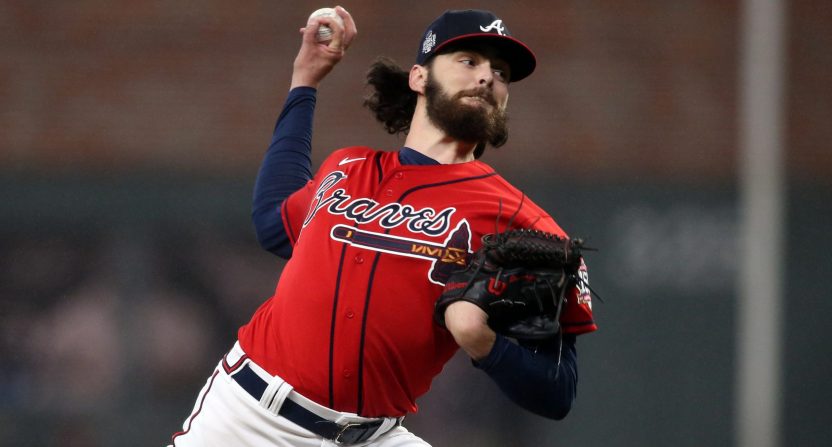 Atlanta Braves starting pitcher Ian Anderson had a no-hitter going in Game 3 of the World Series on Friday night against the Houston Astros. After five innings and 76 pitches from Anderson with the Braves leading 1-0, Atlanta manager Brian Snitker opted to pull the rookie right-hander.

Now, the conditions are rainy and messy at Truist Park, and despite the no-hitter, Anderson had some command issues (with three walks, one hit-by-pitch, and 39 of the 76 pitches for strikes). Additionally, doing whatever it takes to win is the priority when it’s the World Series, and Anderson averaged only 68 pitches over his previous three starts (and only threw 100-plus pitches once this season, back in May). The Atlanta bullpen was fresh after a day off on Thursday, and we know teams are now being more aggressive with bullpens than ever before.

The Braves lost the combined no-hitter in the top of the eighth inning, when Aledmys Díaz hit a bloop single vs Tyler Matzek on a very catchable ball.

There goes the no-hitter, in pretty lame fashion. #WorldSeries pic.twitter.com/ZAkTJ5zRxp

Here’s a sampling of how Twitter reacted to Anderson’s performance and Snitker’s decision to pull him:

Ian Anderson is tied for the 2nd-longest no-hit bid by a @Braves pitcher in a #WorldSeries game (Tom Glavine, 1995, Game 6).

Ian Anderson is officially out of Game 3. He tossed five no-hit innings and is the first pitcher since Don Larsen's perfect game in 1956 to finish a World Series game with at least five hitless innings. Anderson threw 76 pitches, 39 for strikes, struck out four and walked three.

Ian Anderson is the 1st starting pitcher in World Series history to be taken out of the game after pitching at least 5 innings without allowing a hit. pic.twitter.com/MuI13Mnoc3

Ian Anderson after being taken out by Snit. pic.twitter.com/acpR3HvOUh

I woulda taken Ian Anderson out…
.
.
.
.
.
.
.
to a nice steak dinner as a congratulations for such a great start after allowing him to throw the 6th inning

A central problem facing baseball is the best strategies for winning a game conflict with the best ways to make the game entertaining.

Letting Ian Anderson go for a no-hitter would be awesome. Replacing him with AJ Minter increases Atlanta's chances of actually winning tonight.

Ian Anderson is being pulled with a no-hitter through five innings.

He threw only 76 pitches. The Braves have back-to-back bullpen games scheduled for Saturday and Sunday.

Baseball once again shooting itself in the foot as the Braves pull Ian Anderson, working on a no-hitter, after just 5 innings and 76 pitches (inc just 9 in the 5th). Lots of talk about concerns regarding the aesthetic and entertainment value of the sport, and this doesn't help.