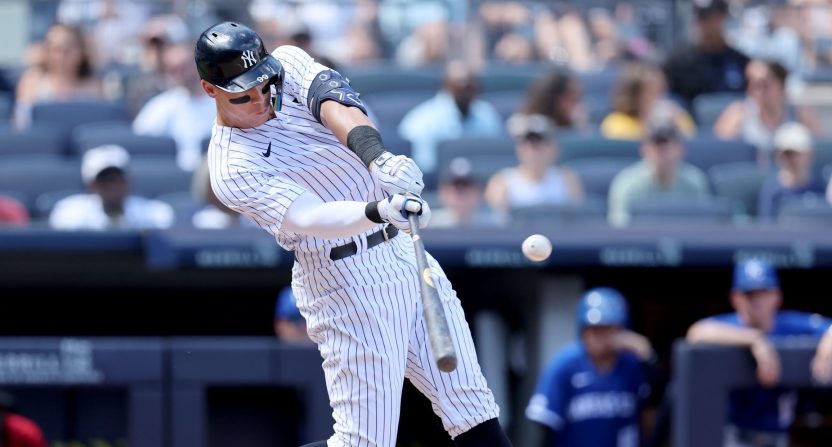 Imagine a world where Aaron Judge is a bad baseball player.

Tim McIntosh has been to that world, or that time, anyway.

The former New York Yankees scout shared some hilarious anecdotes with the New York Post this week recalling his first look at Judge as a high school player in California.

Before you think that McIntosh might be the worst baseball scout of all time, consider that some other MLB scouts were even more cutting in their initial assessments of the future legend. McIntosh recalls one Red Sox scout became upset after flying to California to watch Judge play a high school game.

“Are you f—in’ kidding me? They fly my a– out here, and [Judge] can’t even play dead,” McIntosh recalled the scout saying.

A scout with the Giants told McIntosh Judge was “the one guy who, when he hits the ball back at the [batting practice] screen, I don’t flinch. There’s nothing coming off the bat.”

Yet McIntosh — who played several MLB seasons, including a stint with the Yankees in 1996 — avoided all those negatives in writing up the Yankees’ first scouting report on Judge, saying only that he needed to gain strength. One of his fellow Yankees scouts was not impressed either, but presciently noted, “Write him up. He’s raw, but he’s so big that anything can happen. I’ve seen crazier things happen.”

The “crazier things” that followed involved Judge getting stronger, dominating in college at Fresno State, and being selected No. 32 overall by the Yankees in the 2013 MLB Draft.

Flash forward to 2022 and Judge is rewriting the Yankees and American League record books. He crushed his 60th home run Tuesday night and he’s on pace to win the AL Triple Crown.

“Everybody missed on him,” McIntosh said. “But he just kept getting better and better.”