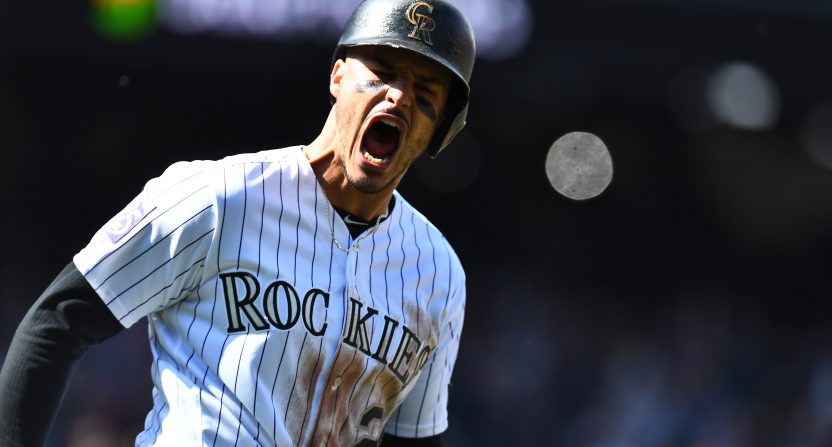 After a relatively quiet offseason, the Colorado Rockies took the baseball world by storm on Tuesday morning. The Rockies have reportedly agreed to an eight-year contract extension with third baseman Nolan Arenado, worth between $255 and $260 million, per Jeff Passan and Ken Rosenthal.

BREAKING: Third baseman Nolan Arenado and the Colorado Rockies are finalizing an eight-year, contract extension worth more than $255M, league sources tell ESPN. Deal includes an opt-out after three years, would give Arenado the largest per-year salary of any position player.

The contract also contains an opt-out after the third season (which would be after the 2021 season, when Arenado would be 30), and a no-trade clause.

Nolan Arenado’s deal with the Colorado Rockies will run through 2026, though the opt-out clause after the third season would allow him to hit free agency at 30 years old, sources tell ESPN. The eighth year and record-breaking AAV offered by the Rockies got this deal done.

The 27-year old is a bona fide superstar and one of the best players in baseball. He’s won six Gold Gloves during his six-year career in the majors, and has made the NL All-Star team and won the Silver Slugger award at third base in each of the last four seasons. He’s also finished in the top ten in NL MVP voting in each of those last four seasons, and has been a top five finisher in each of the last three seasons. Over that incredible four season stretch, Arenado has played in 632 games (out of a possible 649, including 2018’s Game 163 against the Dodgers), slashing .297/.358/.573 with 158 home runs and (in case this is your sort of thing) 503 RBI.

Arenado’s 20.9 fWAR over those four seasons ranks tenth in baseball (just ahead of Bryce Harper), while his .386 wOBA also ranks tenth. Only Nelson Cruz and Khris Davis have more home runs than Arenado, while no one has driven in more runs. The Rockies keeping him in Denver for the foreseeable future is a fantastic move for the organization, given that he was scheduled to hit free agency after the 2019 campaign.

As I mentioned earlier, it’s been a quiet offseason for Colorado, who tied the Dodgers for the NL West crown in 2018, lost the division on a one game tiebreaker, beat the Cubs in the NL Wild Card game, and were swept by the Brewers in the NLDS last October. They lost second baseman DJ LeMahieu, reliever Adam Ottavino, and outfielders Carlos Gonzalez and Gerardo Parra in free agency, replacing them with just Daniel Murphy, who is expected to take over as the every day first baseman for the team. Ian Desmond, the team’s primary first baseman last year (for some reason), will replace Charlie Blackmon in center field, while Blackmon takes over from Gonzalez in right. The team is counting on David Dahl (who is never healthy) to replace Parra in left, and seems content to roll with rookie Garrett Hampson at second.

It’s a lot of movement featuring many of the same players, and one could assume that the defensive failings of Blackmon in center, Gonzalez in right, and Desmond at first could be papered over with Desmond in center, Murphy at first, Blackmon in right, and a full year of Dahl in left. But losing the defensive prowess of LeMahieu and Parra hurts, no matter how middling both were at the plate.

The Rockies can afford a long-term deal for Arenado, which is one of the reasons this contract works in both the short and long term. The combined $15 million that Gonzalez and Parra made last year is off the books, along with LeMahieu’s $8.5 million. That allowed them to pay a shitload for Arenado’s final year of arbitration before free agency ($26 million, before the contract extension was agreed to), and they have money coming off the books next year in the form of Mike Dunn and possibly catcher Chris Iannetta. In 2021, Wade Davis, Bryan Shaw, Jake McGee, and Murphy all have options and could all fall of the books, while Desmond’s salary plummets from $15 million to $8 million. Of the Rockies’ young core, the only players scheduled to hit free agency from 2019-2021 are Trevor Story and Chad Bettis. That gives Colorado one hell of a window, especially in an NL West where the Diamondbacks and Giants seem to be entering rebuild phases and the Padres are still a step or two away from exiting their rebuild and transitioning into contenders.

But the real win here for the Rockies is keeping Arenado with the organization and off the free agent market next winter. The market following the 2019 season looks interesting, with a market highlighted by Jose Abreu, Khris Davis, Josh Donaldson (again), Paul Goldschmidt, Marcell Ozuna, Anthony Rendon, and the three most interesting names – Xander Bogaerts, Gerrit Cole, and Chris Sale. Arenado would have been the best position player in that class, and him committing long-term to the Rockies is only good news for the guys like Donaldson and Rendon, who are now poised to cash in as the best third basemen on next year’s free agent market.