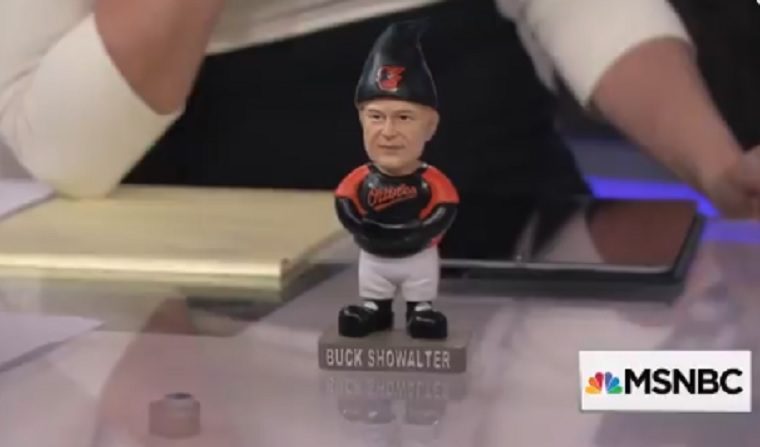 Kasie Hunt’s show on MSNBC didn’t stick to news and politics Sunday. Hunt is a long-standing Baltimore Orioles fan, extending to having a promotional garden gnome of manager Buck Showalter on her desk, and her producer managed to get Showalter to call into the show Sunday.

Hunt starts by asking a question about the unusual way the Orioles built their team during spring training. (Five players on the projected 25-man Opening Day roster were signed after camp began, a sixth was signed just days before that, and a seventh, pitcher Alex Cobb, signed so late he isn’t expected to be on the opening-day roster.) Showalter says he was impressed with the first pitch Hunt threw out at an Orioles game last summer, and “If you were left-handed, we might have a spot for you.”

ICYMI: Our very own @kasie threw out the first pitch for the @Orioles, who went on to beat the Rangers on Monday. #MTPDaily pic.twitter.com/eUNwatD5cE

Hunt then mentions how the Orioles have “a couple of guys on the squad, this might be their last year with the team. What do you think, is this our year?” Showalter responds, “Well, we always feel that way. …You never know. I’m going to dwell on the time we have. They’re special people, and it’s been fun to be around.”

He then asks Hunt “What do you think, Kasie? Do we have enough pitching?” She responds “I’m a little, if I’m worried about anything it’s that, but Cobb gives me some hope.” She then thanks Showalter for his time and says “Let’s go, O’s!” and he says “I’ll see you at Camden Yards.”

That’s an interesting crossover of sports and politics, but a fun one, and it’s cool that Hunt got to talk with Showalter here. And she was pretty excited about it afterwards:

That’s not the usual MSNBC guest, but certainly not a bad one.