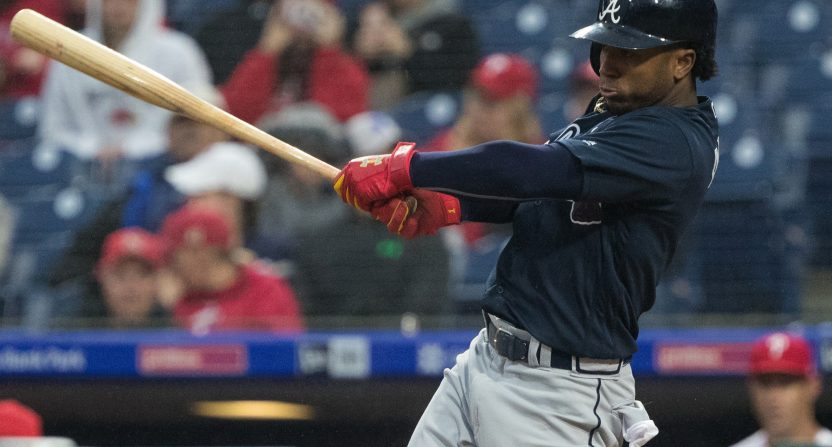 Quick – who is the best second baseman in the National League?

You probably don’t have an answer off the top of your head. I know that last night when I was thinking about this question, I didn’t. Second base has been a revolving door in the NL for the last few seasons. Eight different players have started the All-Star Game for the NL at second over the last eight years, which follows a 24 year spell where four players (Craig Biggio, Jeff Kent, Ryne Sandberg, and Chase Utley) started 20 All-Star Games at the position.

And since All-Star Game starts are a terrible way to determine the “best” player at each position, there isn’t exactly a consensus when you look at fWAR either. Over the last eight seasons, seven different players have led the NL’s second basemen in fWAR. The one player to lead the league in multiple seasons was Daniel Murphy of the Nationals, who has reigned supreme as the NL’s top fWAR leader at second base over the past two seasons.

But while Murphy has had an incredible two seasons in DC, he’s not the hands down best second baseman in the NL, if only because of the fact that he hasn’t played an inning in the majors this season. The gap between Murphy and the field isn’t so vast that he will have this completely arbitrary title grandfathered onto him based on his performance.

If not the absent Murphy, then who?

How about a 21-year old with just 84 major league games and 371 plate appearances under his belt? That’s right – what about Ozzie Albies?

During his brief major league career, Albies has done nothing but hit the shit out of the baseball. He’s slashing .288/.350/.523 in those 84 games, homering 15 times and stealing 11 bases. This year, he’s been one of the best players in the entire National League, hitting .293/.341/.347 with a league-leading (!!!!) nine homers and a major league-best 12 doubles. In 27 games played this year for the Braves, Albies ranks second in the National League with 1.4 fWAR, a hair behind another second baseman – Asdrubal Cabrera of the Mets, who is enjoying a fantastic start to the year after consecutive above average campaigns for New York.

Since his major league debut last August for the Braves, Albies ranks fifth among all NL second baseman in fWAR, despite having at least fewer than 200 plate appearances than all four players ahead of him. Of those four, one is now a center fielder in the American League (Dee Gordon), one is injured (Murphy), and the other two are Cesar Hernandez of the Phillies and Javier Baez of the Cubs, two players that also should be in this conversation. For the record, Albies ranks behind just Murphy in both wOBA and wRC+ among NL second basemen since the start of 2017 (with apologies to Austin Barnes of the Dodgers, who has played just 112 innings at second base over the last two seasons and is more of a backup catcher than a second baseman).

Is it crazy to suggest that a player that hasn’t even collected 400 plate appearances in the majors is already the class of his position? Maybe – but remember, it’s not as if there has been a dominant second baseman in the NL aside from Murphy over the last decade. Since Chase Utley’s streak of four straight NL All-Star starting nods was ended in 2010, only nine (nine!) NL second basemen have topped 10 fWAR, a list that includes the aforementioned AL center fielder (Gordon), a third baseman (Anthony Rendon), a current AL second baseman on the verge of losing his job (Neil Walker), and three players whose careers appear to be over (Brandon Phillips, Dan Uggla, and Rickie Weeks). The other are Josh Harrison of the Pirates….and of course, Murphy and Utley.

When you make the timeframe more and more tight to focus on the last fiveseasons, new names surface, like DJ LeMahieu, Joe Panik, and Kolten Wong, but none of them can overtake old mainstays Gordon, Harrison, Murphy, or Walker.

Hell, even if you just focus on the last three seasons, Albies is a top 15 second baseman in the NL – despite not playing in the majors at all in 2016 and only for two months in 2017.

The craziest thing about Albies’ success in the majors to me is how young he is. Albies turned 21 in January. Baez turned 25 in December. Panik and Wong are both 27. Hernandez will turn 28 in May. LeMahieu will be 30 in July. Albies is younger than all of them by *years*, and he’s trucking the National League.

That’s it, I convinced myself – Ozzie Albies is the NL’s best second baseman. Well, he is today – if Murphy comes back next week and starts raking, all bets are off.

This may be a catch-of-the-year frontrunner thus far this season from Liberty wide receiver Javian Lofton.

This may be a catch-of-the-year frontrunner thus far this season from Liberty wide receiver Javian Lofton.