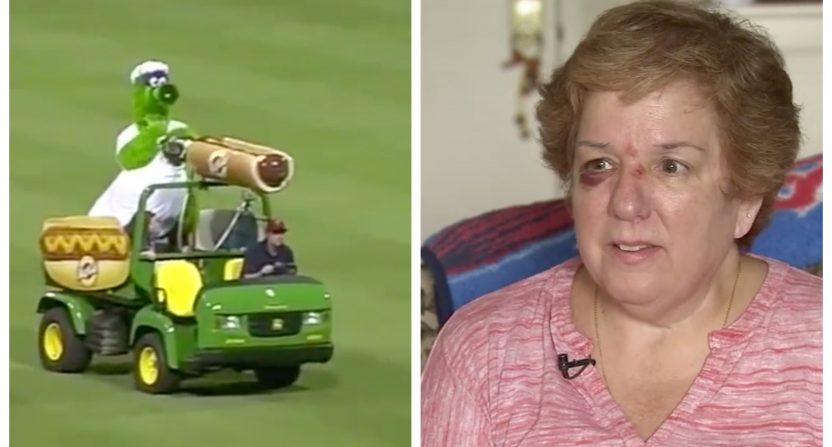 Often at baseball games, signs around the ballpark warn fans about flying bats and balls. It seems that maybe they should also warn of flying hot dogs.

Philadelphia ABC affiliate WPVI reports this week on a Phillies fan who suffered a hematoma in her eye Monday night after being struck in the face by a hot dog launched out of a cannon by the Phillie Phanatic. Her name is Kathy McVay, and although she says she doesn’t plan to take any legal action, she wants you to know she’s has suffered a lot. Via WPVI:

On Monday night, she ended up in the emergency room for a CAT scan to make sure she didn’t suffer a concussion. She is black and blue and very sore. Her facial injury requires ice every 20 minutes.

She explained, “I have a small hematoma in my eye. And mostly, it’s going to get worse before it gets better. It’s going to go down the side of my face.”

As McVay explains it, her problem wasn’t that she was looking at her phone or talking to friend. Her problem was that she is recovering from a shoulder injury and was therefore unable to catch or deflect the hot dog, which was reportedly wrapped in duct tape. With no ability to defend herself, she was drilled between the eyes, sending her glasses flying.