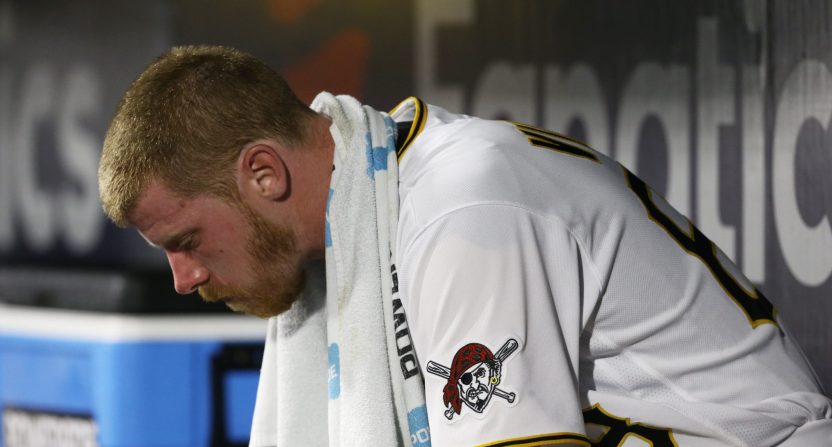 The life of a relief pitcher is sometimes a rough one. That was the case for Pittsburgh Pirates reliever Cam Vieaux in Friday’s game against the Milwaukee Brewers.

Milwaukee led 9-1 when Vieaux took the mound in the top of the eighth inning. So, his assignment, was, for all intents and purposes, nothing more than mop-up duty. Things did not go well.

Two runs had already crossed the plate when Willy Adames came up with the bases loaded and added to the damage.

It didn’t get any better. Rowdy Tellez reached on an error, Andrew McCutchen singled and Mike Brosseau brought both of them in with a double. Vieaux then walked Luis Urías before finally retiring Omar Navarez — on his 48th pitch of the inning.

Vieaux retired the next two hitters to mercifully end the inning. In one inning of work, he allowed eight runs (seven earned), surrendered six hits, walked three, struck out one and threw a staggering 56 pitches.

Not only was he left out there for the entire inning but apparently the thought of taking him out of the game never crossed the minds of any of the Pirates coaches.

Pirates reliever Cam Vieaux just threw 56 pitches in the eighth inning and no one ever got up in the Pirates bullpen. What in the world.

Relief pitchers often have to wear one in blowout games.

But even with that understood, many watching this game felt that leaving Vieaux in the game was cruel.

Cam Vieaux is absolutely taking it on the chin right now

Cam Vieaux may never see the majors again after this game sadly.

It’s a shame because he showed flashes of being decent.

Get Vieux the hell out of there. 45 pitches, no outs. His arm doesn't have to die for this game.

I can't believe Shelton is hanging Vieaux out to dry like this.

If I'm Cam Vieaux I'm removing myself from this game

Had some time to let it set in, but what in the heck are the Pirates doing leaving Vieaux in that long? I understand having to eat innings in blow outs, but that wasn’t right. 56 pitches in 1 inning is irresponsible, hope he doesn’t end up being hurt after this

Cam Vieaux has every right to throat punch his manager tonight. #BrewCrew #PiratesStrong

No manager likes it, when a position player has to pitch in a blowout, but it’s better than having Cam Vieaux throwing 56 pitches. I mean what are we doing here?

Most pitches ever thrown in a single inning was 62, Cam Vieaux just came up 6 pitches short of history.

Vieaux needs to be taken out to a nice steak dinner, after a long ice tub. He's thrown over 50 pitches this inning. That's irresponsible.

What’s especially unfortunate is that, while it was a small sample size, Vieaux had done well in his earlier outings. Vieaux allowed only one earned run over his first four outings of the season, giving him a 2.25 ERA entering Friday’s game. When Friday’s game ended, his ERA was 14.40.

So, he’s earned everyone’s respect and has every right to be frustrated with the way he was used.