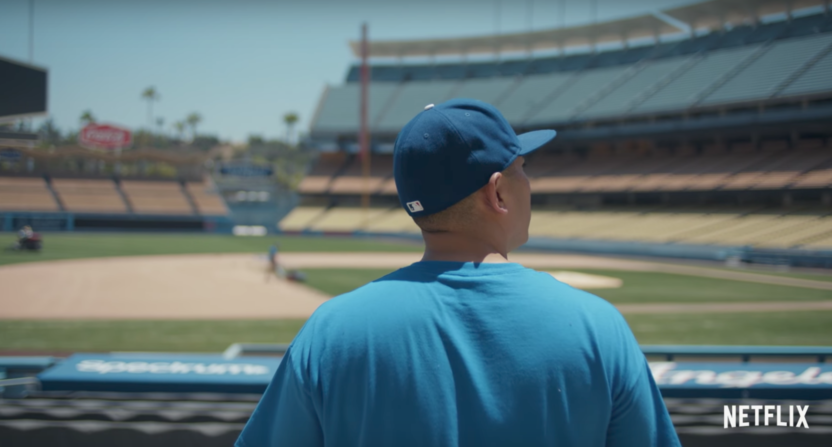 The premise of “Long Shot,” a new Netflix documentary released last Friday, is almost too incredible to believe. A man, Juan Catalan, is accused of murder and threatened with the death penalty, and he can’t prove his alibi: that he was at a Dodgers game when the crime was committed. Then his lawyer discovers that Larry David and HBO were shooting an episode of Curb Your Enthusiasm at Dodger Stadium that very night (It was “Car Pool Lane,” one of the show’s best ever), and the show’s tape could offer Catalan’s best shot at exoneration.

Though the film runs only 40 minutes, it was a long labor of love for director Jacob LaMendola, who spoke with Awful Announcing this week about how “Long Shot” came to be and what we should take away from it.

Awful Announcing: I’ll start off with the obvious question. How did you hear about this story?

Jacob LaMendola: That question comes up a lot, and I wish it was a more exciting answer, but I found it when I was looking at the IMDB “trivia” page for Curb. It’s one of the first facts that comes up. I checked last night, it’s still there. It said, “An episode helped exonerate a guy from murder charges,” and just like that I was fascinated and curious from that, and it kind of went from there. That was five years ago. That’s how it all started.

AA: So you saw that, and then who did you call to try to turn it into a film?

JL: The first thing I did was I tried to find Juan, but he was impossible to find. So I found his lawyer, Todd Melnick, and I called him, and I ended up having this long conversation with him. So I flew from New York to California to meet him and Juan, just to see. I really didn’t know if it was going to be a movie at that point. I just wanted to meet them. And when I did and just heard the story and really heard how they were as storytellers, that’s what showed me it should be a film and not just an article. It was the way that they told the story.

That was the genesis of it. We spent those five days together in California, just kind of talking. And that’s when I was like, “I think I’m gonna make this a film.” I had no idea it was gonna take five years, I didn’t know all the people it was going to involve, but I figured if it started with Juan, that was a good first step.

AA: So why did it take five years? What was going on during that time?

JL: Literally everything was a challenge. Every interview was close to impossible to get. The archival was incredibly difficult to locate. Some of the stuff was stored in boxes in different file facilities in Los Angeles. So the archival was impossible, the interviews were even more challenging, trying to get Larry David took a really long time. The judge, we had to wait for her to retire so that she could speak freely. And then, Juan’s brother’s in prison, organizing time to speak to him to understand the complexity of the story, that took forever.

But then amidst all of this, the hardest part is getting financing. While you’re trying to find financing, you’re also trying to figure out you life. I was balancing making this enormous project with figuring out how to stay afloat. I would be working a lot, taking other jobs, balancing relationships with friends and lovers and just trying to figure it all out like everybody else. When Netflix came on, it was like the fourth year, and they basically gave us the final push to finish the film. The only caveat was that you’ve been waiting four years to have this baby, but you’ve gotta have this baby right now. So we had to finish in that last year.

It’s just difficult being a filmmaker, and especially with a project like this, where I had no prior experience dealing with a wrongful conviction case, because it is very much journalism. It just took forever.

AA: The whole point of the documentary is that there’s not much footage of the night in question. What kind of challenge did that pose for you in trying to compose a documentary?

JL: That’s a really good question, and it was the biggest challenge of the film. And not just the murder, but that the whole story took place in the past. So really the question was, how do you visualize a story that already happened? We had upwards of 100 hours of footage, and the finished film is only 40 minutes, so it’s like, we really tried to tell the story as if it was in the present tense. And that guided a lot of our decisions. And when we started doing that, we found we had kind of a structure with the interviews, and we let the interviews dictate the visuals that were needed. It was like a skeleton that we laid down, first with interviews, and then we always tried to complicate it a little with visuals that might not come first to mind. That was our process.

AA: From what you’re hearing, which aspect of the film is grabbing people the most: the criminal justice/wrongful conviction aspect, the baseball aspect or the Curb Your Enthusiasm aspect?

JL: So the movie has been out for like four days, which is fun because it’s been really overwhelming, but I’ve been trying not to read too much. But I have been seeing some comments and things like that, and a big part of the conversation is just the element of chance and the weight of that in a wrongful conviction case. Chance, for better or worse, played a significant part in Juan’s story, and it made people question how much chance is really a big part of other wrongful convictions or convictions in general. Not necessarily a good or bad thing, but it is something to wonder about. And I think Juan’s story is kind of shedding light on this element of chance and how important, ultimately, that is in somebody’s case.

AA: With this film, are you trying to make a statement about the justice system, or is that just ancillary to the story you wanted to tell?

JL: The way that we started was, we really wanted to just tell Juan’s story. And it seems obvious, but there’s politics involved in almost anything you do, especially when you become really specific in the story telling, it just kind of naturally comes out. I don’t think we went in with any particular statement, other than, let’s tell Juan’s story as precisely as we can, but through the years, the people that did and did not participate in the footage that we were able to use and not use, I think it does say something a little bit more. It kind of carves its own voice, without us having to try.

So I don’t know if you got a particular message, which I think is wonderful, but we didn’t go in with something specific. It was really, let’s tell Juan’s story and see what happens.

AA: Making a Murderer stretched a potential wrongful conviction into nearly 10 hours of documentary, while your film is only 40 minutes. That was a more involved case, but did you think about trying to go into all the legalistic aspects of Juan’s story?

JL: Sure, we considered everything when we were starting. But there are certain movies — Making a Murderer is a good example, The Jinx is another one, Serial — all of these things came out while we were making this film. And it almost became obvious to us that our film was not any of those things. You can research what the police officers did. There’s certainly more story to tell, and there’s certainly things that we didn’t include in the film that you can uncover, but as we were making it, we realized it’s almost more powerful to make this not be the wrongful conviction story to not make this, “Did he do it?” It’s fairly obvious from the first minute that he’s an innocent guy just telling his story.

And once we realized it was going to be a short film, that really did guide a lot of our conversations and choices, as opposed to trying to make it too long. The most common thing I’ve heard about a documentary is, “It was amazing, but it was just way too long.” I’ve heard that about everything. So it was almost really freeing to know we had 40 minutes and to just play as much as we could in that time frame.

AA: So you’ve been working on this for five years, you finally got it out. What’s next for you?

AA: So it sounds like we’re going to hear more about Juan in the future?

JL: I hope so. He’s a great friend of mine right now, and I think that we’re kind of in this together, me and Juan. We’ve become really close, and I would hope that he feels included in my life, just like I do in his.