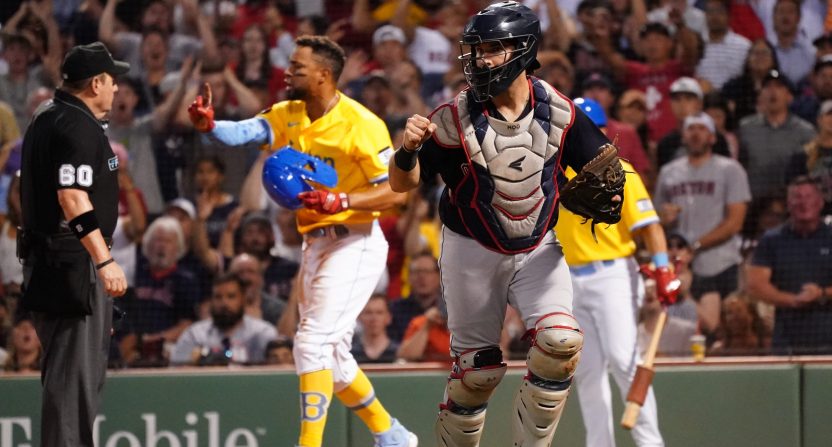 Things are not going well lately for the Boston Red Sox.

Well, Boston has followed that up with losses in three of the last four games, and the latest loss now has the Red Sox dead-last in the AL East.

Boston lost 8-3 to the Cleveland Guardians on Tuesday night at Fenway Park.

With the loss, Boston falls to .500 on the season at 49-49. And that drops them to last place in the AL East, 17 games back of their hated-rival New York Yankees. The young-and-fun Baltimore Orioles move ahead of Boston into fourth place at 49-48.

It is July 26th and the Red Sox are last in the division behind the Orioles. pic.twitter.com/lZ1Rf2u09Z

The Red Sox are now last place in the AL East pic.twitter.com/l0MroJiWJP

They're in last place in the division.

It’s been quite the fall for the Red Sox, and now they find themselves 3.5 games back for the third AL Wild Card slot, chasing four teams (including the Guardians and Orioles).

Bloom, on NESN, agrees with what Sam Kennedy said that the Sox haven't discussed trading Bogaerts or Devers and adds that "we don't plan to."

Keeping Devers — a free agent after the 2023 season — through the Aug. 2 trade deadline makes sense, but the Red Sox may have to seriously consider trading Bogaerts, who made it clear last October that he intends to opt-out of his contract and become a free agent this offseason.

Bogaerts — .317/.388/.452 slash line, 3.9 WAR per FanGraphs (12th among MLB position players) —  could bring back a substantial return. Now, if the Red Sox start playing better baseball before Aug. 2, or if they intend to try to sign Bogaerts long-term, it makes sense to keep him in-house. But if things keep trending the wrong way, Boston would be stubborn not to at least listen to trade offers for the shortstop.

Here’s more from baseball fans on Twitter regarding the Red Sox’s worse and cellar placement:

Not including the 2020 covid season, the Red Sox have just become the first non-Orioles team to be in last place in the AL East in July or later since the Blue Jays in 2017.

They fall to last place in the AL East, a half-game behind the Baltimore Orioles.

The Red Sox are in last place. I am not available for comment at this time. Please respect my privacy.

Very disrespectful of the Red Sox to play like this on David Ortiz night.

Red Sox lose. Orioles are alone in fourth place in the AL East.

And they are just three games back of the Rays for third. They can trim that number to 1 over the next couple days. https://t.co/qsnKljiDdv