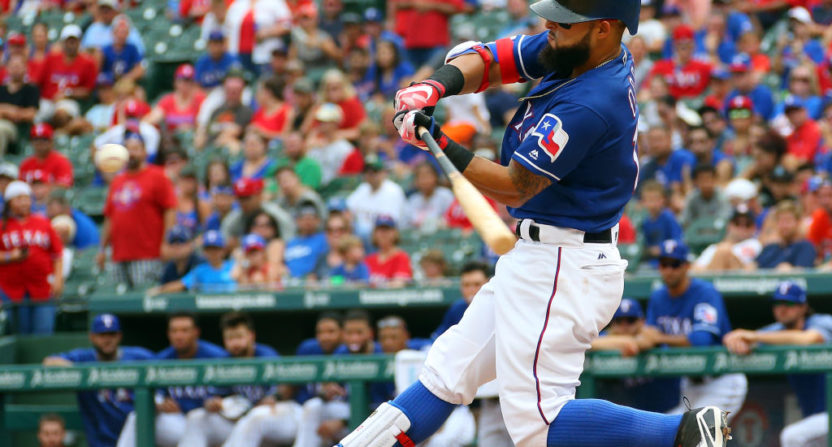 Hitting a home run is the best thing a hitter can do, and home runs have often been so valued that players have been summed up just as a “20-homer guy” or “30-homer guy.” However, the 2017 MLB season is poised to break the record for leaguewide home runs Tuesday night (update: yes, that happened), and is already well ahead in home runs per game (1.26 heading into Tuesday night’s contests, well ahead of 2000’s 1.17 and last year’s 1.16). A lot of that appears to be about “juiced” balls that have consistently flown farther (FiveThirtyEight’s Rob Arthur had an excellent piece Tuesday examining that from the standpoint of drag coefficients), while some of it is also likely about the large numbers of players going for higher launch angles, and there may be other factors involved as well.

But regardless of the specific mix of causes responsible, this means we’ve seen players having some of the worst overall batting seasons ever while still producing high home run totals. As Sam Miller writes at ESPN in a piece appropriately titled “Welcome to the era of the terrible, horrible, no good, very bad 30-home-run hitter,” the biggest case in point may be Texas Rangers’ second baseman Rougned Odor:

If I could put one memento from this home run era into the time capsule, it would be Rougned Odor‘s line from June 30.

Odor, the Texas Rangers’ second baseman and No. 5 hitter that day, homered in the fourth inning with a man on base. It was his 13th long ball of the year, which used to be a lot. In 1988, the most formative year of my own baseball fandom, 13 home runs would have led American League second basemen for the entire season. Homers might not be as rare as they used to be, but they’re still the most valuable thing Odor could have done 13 times.

In that game, he also grounded into an inning-ending double play with the bases loaded, flied out, popped out and struck out. According to run-expectancy estimates, Odor’s bat actually cost the Rangers runs on a day he hit a two-run homer. This was a very Rougned Odor accomplishment: He closed June with a .207/.244/.376 slash line. He had been baseball’s second-worst-hitting second baseman.

Things haven’t gotten much better or — if you’re counting dingers — much worse. Depending on your filters, Odor has demolished previous Worst Season With Most Homers fun facts. Before this season, no hitter had hit more than 26 homers with an OPS+ lower than 80 (which is to say, an OPS lower than 80 percent of the league’s average). Odor has already hit 29 homers, with an OPS+ of 67. He has actually been worse than that, since OPS undervalues OBP, and Odor seems to also undervalue OBP. His .208/.251/.405 line through Sunday, adjusted for his hitter-friendly ballpark, makes him the third-worst qualified hitter in baseball, according to FanGraphs. Eight starting pitchers have outhit him.

Despite those 29 home runs heading into the Rangers’ Tuesday night game with Seattle, Odor has produced -0.9 wins above replacement as per FanGraphs. He’s living proof that even a lot of home runs doesn’t necessarily redeem an otherwise-struggling player. And this comes in the year where he signed an offseason six-year, $49.5 million contract extension (which could go as high as $62 million thanks to a club option at the end), which isn’t great. As Jeff Sullivan noted around the signing of that contract, though, even at that point, there were questions about almost everything but Odor’s power:

Odor has not rated well in the field. As a second baseman, according to DRS, only Daniel Murphy has been worse since Odor first came up. According to UZR, only Aaron Hill and Brett Lawrie have been worse. To whatever extent you’re willing to trust advanced defensive metrics for infielders, they believe that Odor’s been a liability.

…His value is built upon his bat, and his bat has obvious thump, yet he’s below-average in terms of making contact and pitch selection. I should re-state that — it’s not strange for a powerful player to have an over-aggressive approach. It’s far more strange for that player to still be successful. The Rangers are going to be happy with Odor for as long as he’s a productive everyday hitter. The question is one of sustainability, because last year had little big-league precedent.

The fact of the matter is that Odor hasn’t just been a fine hitter for one year — he was also a fine hitter for much of the year before. That helps make it easier to believe he could be another Adam Jones, or Alfonso Soriano. The downside is that Odor could instead become a worse defensive Jonathan Schoop, but even Schoop is just 25, not yet necessarily a finished product. There aren’t that many player comps, because, again, Rougned Odor is atypical. That’s part of the problem with trying to analyze him.

However, when you look at how poorly Odor has done this year in every area apart from home runs, there are actually some others in his boat (or close to it). Miller has more on that:

A rising home run tide tends to lift all boats, but a few archetypes become most emblematic of each era. In the live-ball 1920s, it was the superstars redefining offensive limits; in the steroids-fueled 1990s, it was the middle infielders with suddenly thick forearms doubling their career highs; in the analytics era of the mid-2000s, it was the super-patient plodders with terrible defense but keen eyes. This era’s avatar: the home run hitter who is terrible.

This is particularly fascinating because, as Arthur writes at FiveThirtyEight, it appears that the farther-flying balls are not just becoming more consistent, but are likely here to stay:

It doesn’t seem as likely to be a coincidence that the baseball became so much more consistent this year. MLB commissioner Rob Manfred has admitted that the standards are broad, and in interviews conducted around the all-star break in early July, Manfred even said he was considering tightening the specifications.

He’s also made his preference for this era of baseball known, emphasizing that fans love strikeouts and home runs. As pitchers throw ever harder and batters accrue ever more of their value with dingers, Manfred must be happy with both the current state and long-term direction of the game.

…Making the balls more consistent might further affect MLB’s overall home run rate, but it also means pitchers and hitters should end up with a more even playing field. Such consistency won’t help every player, but at least they’ll have a better idea of what they’re working with — a ball that travels farther and flies faster than it used to.

And thus, the players whose main value comes from home runs seem likely to be able to keep hitting those going forward. But the bigger question is if teams will be content with players like Odor, Napoli and Pujols who are actually contributing negative value by many metrics despite their home run totals. The Rangers certainly seem okay with Odor’s production at this point, giving him the AL lead in games played heading into Tuesday’s contests, and for a team that’s fourth in the AL West and well out of the playoff hunt, it’s probably worth keeping your expensive new investment happy. (He’s also only 23, so he may be able to provide value in the future if he can find more plate discipline, more non-HR hits, and a better fielding performance.)

Other teams may also be fine with otherwise-unproductive players, as long as they’re hitting dingers rather than presenting the terrifying truth. But home runs alone don’t always make for a good player, as Miller’s piece shows. And this historically-high HR season is excellent proof of that.