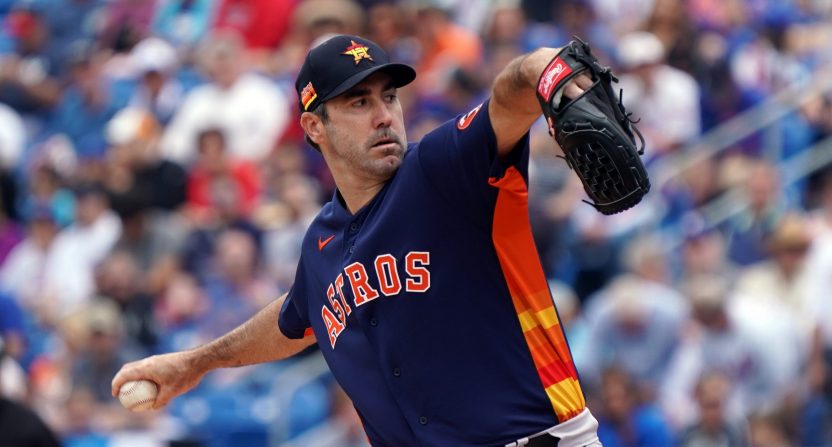 The Houston Astros already lost Gerrit Cole to the New York Yankees in free agency, and now they’ve lost the 2019 AL Cy Young Award winner to injury, for at least a while.

Chandler Rome of the Houston Chronicle reported on Sunday that Justin Verlander is done for the shortened 2020 MLB season with an elbow injury.

The Astros will announce that reigning American League Cy Young Award winner Justin Verlander is out for the season with an elbow injury, two people with knowledge of the situation told The Chronicle on Sunday.

However, Verlander later tweeted that the report saying he’s done for the season “is not accurate.” Verlander did admit that he has a forearm strain, but hopes some rest will heal it, and hopes to return “soon.”

The report that I’m currently missing the rest of the season is not accurate. There is a forearm strain… I’m hopeful that with some rest it will heal and I’ll be able to return soon. Thank you for all the well wishes. 🙏🏻

Houston manager Dusty Baker said that Verlander will be down for a couple of weeks, according to USA Today’s Bob Nightengale.

Dusty Baker said that Justin Verlander has a forearm strain and will be shut down for a couple of weeks and then will be re-evaluated.

And as ESPN’s Jeff Passan — author of The Arm — notes, “‘forearm strain’ is often code for elbow problems.”

Not to get all Schoolhouse Rock here, but the forearm bone is literally the elbow bone, and the forearm muscles are inextricably linked to elbow ligaments. “Forearm strain” is often code for elbow problems. Hope for some healing is standard, so Justin Verlander will be shut down.

Either way, it would seem that Verlander is out for at least two weeks, and probably more than that; he’ll need to get back into starting pitching shape after the rest. And with only 57 games remaining for the Astros (2-1) in this shortened season, that means Verlander will miss a large percentage of the season even if he can return before it ends.

But this news comes out of nowhere, two days after Verlander threw six innings and gave up two earned runs — with seven strikeouts and one walk — in Houston’s Opening Day 8-2 victory over the Seattle Mariners on Friday.

After the game, Verlander “expressed nothing but optimism about his outing, never hinting that he was hurt,” according to Rome.

During a postgame interview, Verlander expressed nothing but optimism about his outing, never hinting he was hurt.

The eight-time All-Star underwent groin surgery in March, but there’s been no indication of any arm issues until Sunday’s news.

Now, the 37-year-old did change his mechanics over the offseason, in hopes of being able “to play eight, 10 more years.” Here’s more from The Athletic’s Jake Kaplan on July 10:

If he planned on playing only a couple more years, Verlander thinks he could’ve stuck with his 2019 mechanics and withstood the strain they put on his body. But that, of course, has never been his plan. He set out to fix the issue. “It was almost like plugging holes in a roof when it’s raining,” he said. “I would fix one thing and another thing would pop up.” On Thursday, he pitched three no-hit innings on 43 pitches in an intrasquad game at Minute Maid Park. As he spoke to reporters on a Zoom call shortly afterward, he described the outing as a culmination of a two-to-three month process. He also noted that his mechanics aren’t exactly where he wants them yet, but they are close.

“I changed a lot of stuff that some people would think was unnecessary,” he said. “But I thought it was necessary, especially if I want to play eight, 10 more years.”

It’s definitely worth wondering if the mechanical changes played a part in this arm injury, but it could be totally unrelated and simply be a pitcher getting hurt (that happens all the time, after all).

But this is a massive loss for the Astros as they try to return to the World Series. Verlander had a terrific 2.58 ERA and 7.4 WAR (according to Baseball Reference) in 2019, and led the AL in wins (21), innings pitched (223), and WHIP (0.803). The outstanding production resulted in his second career AL Cy Young Award.