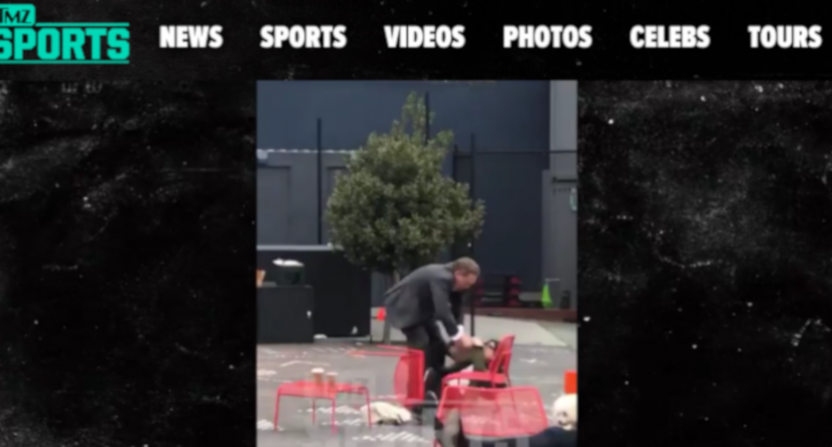 On Friday around noon, long-time San Francisco Giants CEO Larry Baer got into a public altercation with his wife Pam in a plaza in San Francisco’s Hayes Valley neighborhood. Just over an hour later at 1:03 p.m. Pacific, video of that was published on TMZ, which showed Baer appearing to knock his wife out of her chair and drag her to the ground while trying to pry a phone out of her hand, with her screaming “Oh my god! Stop!”

The San Francisco Chronicle also published a piece with those details at 1:05 p.m., one that mentioned “The Chronicle has viewed the video, but the witness did not grant permission for the newspaper to publish it, saying he had sold it to another media outlet.” Here’s the video:

Evan Sernoffsky, one of the Chronicle reporters on that byline (along with Matthias Gafni), later tweeted from the location of the video:

The TMZ piece also includes this:

In between video clips, the person who shot the footage tells us he got involved and helped break up the altercation. Another witness corroborated that.

Witnesses tell us police were not called to the scene. Unclear if they were contacted after the altercation. We’re reaching out.

We’ve also reached out to Baer’s camp for comment. So far, no word back.

This seems like it’s going to raise a lot of questions about Baer’s position with the Giants. He’s been involved with the team for decades and is a part owner of the franchise, and he was named chief operating officer in May 1996, team president in October 2008 and CEO on January 1, 2012. But his behavior here certainly doesn’t look good.

The more notable discussion from a media standpoint may be about how quickly this went from something that happened to something TMZ published video of, though; it’s pretty remarkable to see only an hour between incident and published video, especially with that video being published by an organization that apparently paid for it (as per the Chronicle‘s note), as that presumably involves some contracts. That speaks to not only how there are often eyes and cameras on public figures, but also how quickly video of any sort of public misdeed can spread. And it speaks to TMZ’s prominence in this space that they’re not only the outlet the video-taker went to here, but that they were able to turn it around this fast.