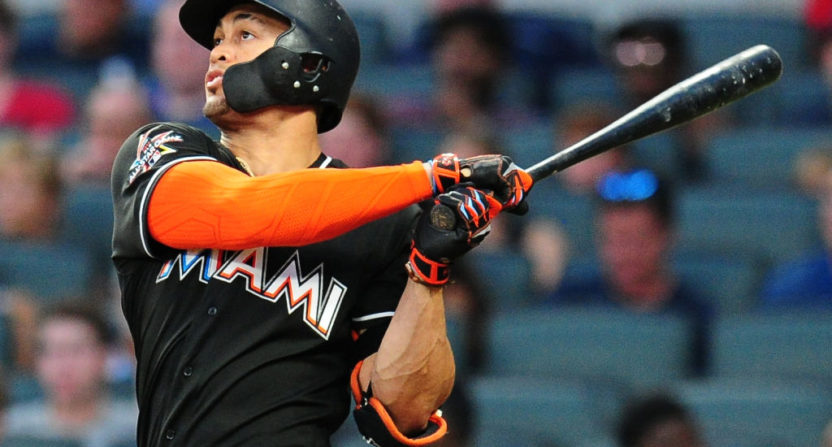 MLB home run leader (and sexy music video star) Giancarlo Stanton has bashed his way into rarified air this season. Thanks to a hot streak like few we’ve seen in baseball history, the Marlins slugger sits at 51 home runs as of Thursday morning, with 30 games left to add to his total.

Stanton’s home-run binge has put him in great position to become the first player since Barry Bonds to hit 60 in a season and opened a debate about the “real” single-season home run record. The record books say Barry Bonds holds the mark with 73, but some fans seek to dismiss him (and Mark McGwire and Sammy Sosa) over allegations of performance-enhancing drug use, claiming Roger Maris’ 61 remains the home run record.

In light of that controversy, we asked our staff, is Stanton’s pursuit of 60 and 61 home runs a big deal? Here are their answers:

Alex Putterman: Even if you consider Barry Bonds the absolute, no-doubt, don’t-even-argue-with-me single-season home run champ, as I do, there’s an undeniable allure of 60 home runs. Sixty separates powerful seasons from historic ones, memorable seasons from legendary ones. No matter how many players eclipse 60 homers, it will always be an important figure. Sports fans love round numbers, and that might be the most hallowed one.

And even if Stanton is highly unlikely to end the season with the single-season home run record, it’s noteworthy that he’s poised to climb the list. If he gets to 60, he’ll tie for eighth most in a season. If he gets to 65 (totally possible!) he’ll tie for fourth. Stanton doesn’t have to eclipse Bonds to make history. It’s worth following how high he can claim.

Oh and also, we should care because watching Stanton launch home runs is very fun.

Joe Lucia:  You can care as much or as little as you want, it doesn’t matter all that much to me.

Personally, I’m incredibly excited for a few reasons. First off, Stanton is the first player to launch 50 dingers since Chris Davis in 2013. The only player to hit 55 since the Bonds/McGwire/Sosa heyday was Ryan Howard, who hit 58 in 2006. So that’s more than a decade without a player seriously challenging for 60, and I forgot how fun the chase really was.

Secondly, we’re finally seeing what a truly healthy Giancarlo Stanton can do. Barring another injury down the stretch, this will be just the third time in his career when Stanton has reached 600 plate appearances. All of those seasons when Stanton raked but couldn’t stay healthy, we wondered what a full season’s output from him would look like — we’re getting that this year.

Thirdly, he’s peerless in the game today, so while homers have spiked, he’s not one of five or six players on another level this year. Aaron Judge is second in baseball with 37 homers. The second-best home run hitter in the National League is Cody Bellinger with 34. Stanton is on a level that no other MLB player can even sniff this season. It’s incredible to see him on a tear like this, head and shoulders above the rest of the league and finally being able to make his mark on baseball.

Deesha Thosar:  Stanton dialing it up to 60 home runs is not only great for the sport, but it’s also just what the Marlins need. It was still awesome when Stanton was the only one in the Marlins lineup mashing consistently. But now they’re second place in the NL East, five games out of a wild card. Tuning into a Marlins game is exciting, and Stanton’s pursuit of 60+ dingers has a lot to do with that.

Ian Casselberry: Absolutely, we should care about Giancarlo Stanton chasing 60 home runs and possibly surpassing Roger Maris’s mark of 61. It might be one of the only compelling storylines to follow in MLB. One, maybe two divisional races could be competitive, and the AL wild-card race is very tight. Otherwise, there won’t be much suspense.

But Stanton going for 60 homers is a story worth following every night, watching Marlins games, checking your phone or tuning into MLB Network for live cut-ins. It’s also historic. Only five players in MLB history have ever hit 60 or more homers. And if you take an askew view of home run records because of the steroid era and choose not to believe that Barry Bonds holds the single-season mark, then only two sluggers — Babe Ruth and Roger Maris — have “legitimately” hit 60 or more.

Regardless of whether or not you think Bonds’ 73 homers should have an asterisk (which is something once said about Maris’s 61 homers, by the way), Stanton is aspiring for something very few people have done. Isn’t that one of the biggest reasons we watch sports?

Liam McGuire: We should care. Giancarlo Stanton is crushing baseballs at a level we haven’t seen, post-steroid era. Hitting 60 home runs would be phenomenal. If he played on the Yankees or Dodgers and not a middling team like the Marlins, his run would be baseball’s biggest story. It’s a feat that we might not see again for a long time (unless Stanton does it again), so let’s appreciate him now.