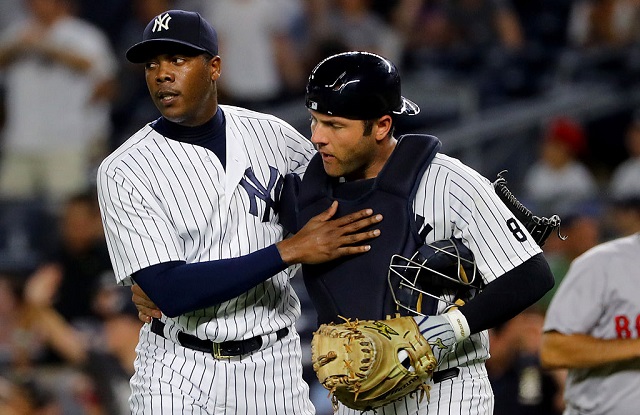 Previously, we took a look at the contenders in each league and what they needed to target at the trade deadline. But what about the teams on the fringes of contention? Should they look to add players and make a run at the playoffs, or should they sell off their usable parts and build for the future? It’s a tough call for a lot of teams, with a playoff spot tantalizingly close. But what would the best move be?

Let’s take a look at some of those fringe teams here. Are they actually contenders? Or should they sell what they can and start looking ahead to the long, cold winter?

The Yankees lack the firepower to keep up with the Red Sox, Orioles, and Blue Jays in the AL East. What they do have, though, are two pieces every contending team will covet in Aroldis Chapman and Andrew Miller. The Bombers could set themselves up nicely for the future with a ransom of prospects for those two relievers, and could net themselves even more if they decide to move the likes of Nathan Eovaldi, Ivan Nova, and others. There’s never been a better time for the Yankees to rebuild.

They’re close enough to the Indians in the AL Central (7.5 games behind, as of July 21) to not throw in the towel yet, and the Wild Card (4.5 games back) is still in their sights. The Tigers have committed too much money to their roster to sell, and they could be an addition or two away from catching up in the playoff race. They’re getting older, but they’re still a good enough team to add pieces. They’re like the opposite of the Yankees this year.

There simply isn’t a reason for the Royals to sell, not when they’re still within striking distance of the division title (nine games back) with a roster that won the World Series the year before. The Royals’ problem has been health, and if they can get some consistency from a few key positions, they’ll be in the thick of things in the American League. Next year might be a different story when they’re faced with the impending free agencies of Eric Hosmer and Mike Moustakas. But there’s no reason to not go for it this year while their window is still open.

They’re one of the hottest teams going right now (34-16 since May 22, after losing four in a row) and have made up a ton of ground between themselves and the Rangers in the AL West (3.5 games behind). They’re a very good team, finally playing like it, and could be a piece or two away from being the favorite in the American League. The Astros are set up where they shouldn’t have to be sellers for a long, long time.

Sure, they’re close enough to the faltering Rangers (6.5 games back) to make you think they might make a run. But the Mariners simply don’t have enough to keep up with the two Texas teams in their division and would be better served to sell whatever pieces they can. They’ve already started by dealing away Mike Montgomery, and should see what they can get for players like Adam Lind and Steve Cishek while they’re at it. The M’s are a good team, not far away from contention, but this probably isn’t the year it happens.

They’re too close to a playoff spot to sell (one game away from a Wild Card spot) and like the Royals, they’re still operating with their championship window open. That’s the time to buy, and the Mets likely feel the same way. Injuries have hurt them badly this year (again, like the Royals) and they could use upgrades in both the lineup and the rotation.

The Cubs may end up boat racing them in the NL Central, but the Cards are right on the doorstep in the Wild Card race (one game behind, tied with the Mets) and are too good of a team to sell. It actually seems like a given that they’ll claim one of the Wild Card spots in the NL, and if they sense some weakness in the Cubs, it might make them even more aggressive at the deadline.

They’ve had a hard time getting going this year, but a moderately successful July has put them back around .500 and within striking distance (three games back) of the Wild Card. But the Pirates have something a number of contenders covet: dominant bullpen arms. Mark Melancon is a free agent at the end of the year and could command a price on the level of Chapman and Miller on the trade market. Plus they have Neftali Feliz and Jared Hughes, who could also bring back a nice return. A small market team like the Pirates has to get creative to stay in perennial contention, and taking advantage of the trade market this year would be a good way to do just that.

To follow @jonmorosi about #Nationals’ interest in Blackmon: WAS has shown past interest as well. Question is whether #Rockies will sell.