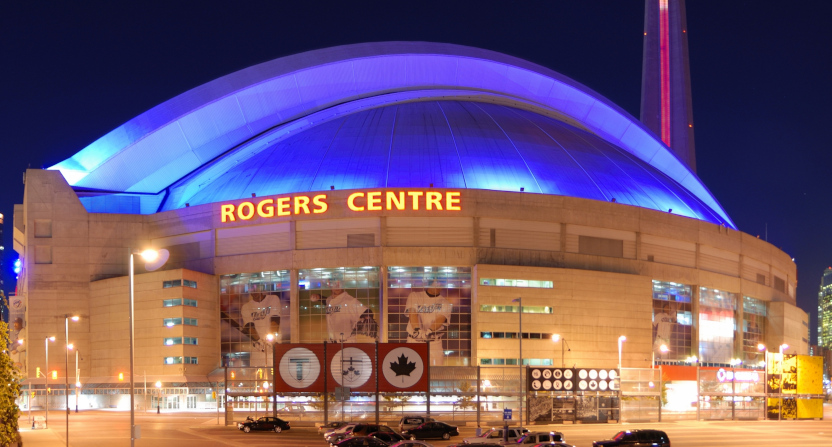 While 29 Major League Baseball teams appear set to play the home games for this year’s abbreviated 60-game season in their home parks, the Toronto Blue Jays now won’t be doing that. There had been conversations for weeks about if the Blue Jays would actually be able to play games in their home park, the Rogers Centre (seen above), thanks to the Canadian federal government’s concerns about both Blue Jays’ players and opponents entering the country from U.S. areas with greater numbers of COVID-19 cases. And while the Blue Jays did receive an exemption for training camp in Toronto, and they did receive municipal and provincial approval for their regular-season plans, Saturday saw the Canadian federal government deny their request for a regular-season exemption to the closure of the Canada-U.S. border for non-essential travel (a closure which is set to run through at least August 21).

So, where now? Well, the Blue Jays had been exploring alternate sites in Buffalo (home of their triple-A affiliate, the Buffalo Bisons) and Dunedin, Florida (where their spring training facilities are). And as of Saturday evening, it looks like they’re heading to Buffalo for their regular season. That isn’t official yet, though. And before we get to a further discussion of that, here are some quotes on Saturday’s decision from Canadian immigration minister Marco Mendicino, via Rob Gillies of The Associated Press (in a piece creatively titled “No Canada: Blue Jays barred from playing games in Toronto“):

“There were serious risks if we proceeded with the regular-season proposal of the MLB and the Jays and therefore we concluded it was not in the national interest,” Mendicino said. “I get that some people will disappointed but this decision can’t be taken as a fan. It is taken on behalf of the health and safety of Canadians.”

…“In Canada you’ve seen us flatten the curve. You’ve seen that cases have decreased significantly and that is largely attributable to the sacrifices Canadians have made. We can ill afford a step back,” Mendicino said.

“We think this is the right call and it is backed by the evidence and advice of our health experts. And fans who still would like to see baseball will still be able to watch the broadcast, just from a different location.”

Mendicino added that the Canadian government is “committed to maintaining an open line of communication with both MLB and the Toronto Blue Jays,” and that this could be reevaluated ahead of the 2020 postseason if the Jays make it there. But for now, though, they’ll have to play their games elsewhere. And Mike Harrington of The Buffalo News has more on how that’s currently looking like Buffalo:

The Jays and Buffalo Bisons have spent the last few days working on a plan to move the games here and make upgrades to the ballpark if Canadian officials said no. Sources say all timetables, including a major upgrade needed for the 32-year-old stadium’s lighting, could be done in time for the games to be played here. Toronto has been the Bisons’ parent since 2013.

…”We have been making plans over the last several days to see what it would take to get our ballpark ready should this scenario arise,” Mike Buczkowski, president of Rich Baseball Operations, told The News Saturday afternoon. “But we have no definite ‘yes’ that the games will be played here at this time.”

…”As Mayor of Buffalo, I would love to see the Blue Jays play at Sahlen Field,” tweeted Mayor Byron Brown.

“The ‘Buffalo Blue Jays’ sound good to me. Let’s find a way to make this happen,” was the thought tweeted by Erie County Executive Mark Poloncarz.

The Jays’ official statement included only that they’re “finalizing the best home location for the 2020 season,” though:

We’ll see if that winds up being Buffalo. But we now know it won’t be Toronto.

[The Associated Press; The Buffalo News; photo via Wikipedia]