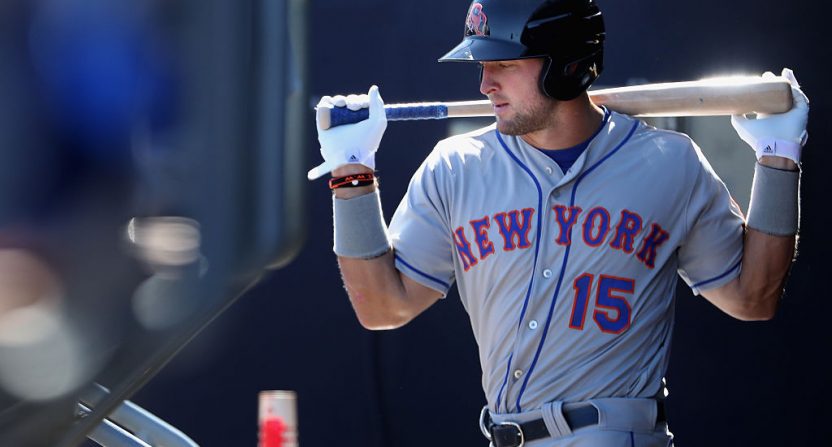 Not content with embarrassing himself on the fields of the Arizona Fall League or MLB Spring Training, Tim Tebow is sticking with baseball (for now) and will be joining the roster of the Columbia Fireflies this season, the New York Mets’ A-ball affiliate in the South Atlantic League.

Some of the phrasing in this press release is telling.

“No one works harder than Tim did this Spring,” said New York Mets manager Terry Collins in an interview today with Marc Carig from Newsday. “He was a pleasure to have around. What he wants is to improve. I’m sure he’ll be a great influence on the kids in Columbia and the fans will enjoy watching him play.”

“Tim Tebow will bring major excitement and national attention to the Fireflies and city of Columbia,” said Fireflies President John Katz. “Baseball fans, sports fans and Tim Tebow fans will likely come from around the southeast to see him play. We expect this to add to the energy at Spirit Communications Park and around downtown Columbia, especially during our opening weekend (April 6-9).”

He’s a hard worker! He wants to get better! He’s going to be a great influence on younger players! They’re going to sell a shitload of tickets, though there’s no guarantee he’ll actually be playing!

There’s also this quote from Katz, talking about Tebow’s intangibles, rather than his actual baseball skills.

“Tebow’s story is so compelling – from the BCS National Championships and the NFL playoffs to reinventing himself as a professional baseball player,” said Katz. “His humility, faith and unwavering commitment to better himself will bring a new dynamic to our clubhouse. Having a player that has achieved his level of success on two big stages will ultimately pay huge dividends for our players as they pursue their dreams of playing for the New York Mets.”

Yep – he’s not going to actively make the team better. He’s going to “bring a new dynamic” to the team!

On the bright side, at least they’re not pretending like Tebow has a chance of actually progressing through their organization.

So…what happens if the Fireflies finish 20 games back?