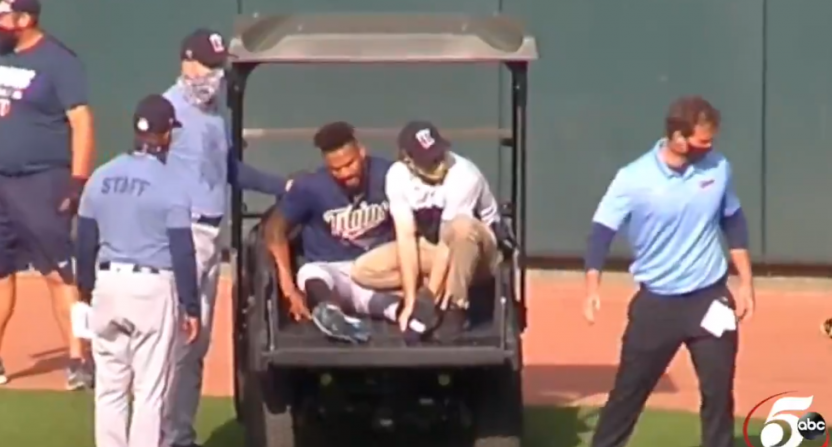 The brutal injury luck continues for Minnesota Twins center fielder Byron Buxton. During intrasquad action on Monday night at Target Field, Buxton suffered a left foot injury and was carted off. The Twins announced that he’s having imaging done, and they plan to share more details on Tuesday.

The #MNTwins have announced a left foot injury for Byron Buxton. He is having imaging done right now. They told us to expect more information tomorrow.

Buxton was down on the field for several minutes before being taken away on a golf cart, as you can see in the following video:

#MNTwins outfielder Byron Buxton carted off the field after what appears to be a pretty severe injury to his left ankle/leg. pic.twitter.com/GmqZ0kGPj0

And that video would suggest that the injury could be pretty serious, with Buxton clearly in a lot of pain and needing help from several staffers.

According to Dan Hayes of The Athletic, Buxton “may have gotten a spike caught in the turf” while chasing a flyball off the bat of Nelson Cruz.

Trainers are out to check on Byron Buxton. Appear to be working on his left ankle. He may have gotten a spike caught in the turf. Wind shifted a fly ball to right center. Kind of an awkward play. Much more when we have real info. #MNTwins

In 2019, Buxton was worth 3.1 wins above replacement (WAR) according to Baseball Reference, but only played in 87 games due to a shoulder injury that required surgery. And that’s after playing just 28 games in 2018 due to injuries and struggles (that were surely related to the injuries).

When healthy, Buxton has shown off his talent, particularly with remarkable athleticism and defense in center field. But again, we haven’t gotten to see very much of it because of the injuries, and it appears that may be the case again in 2020.

It doesn’t help things that we’re dealing with a 60-game season, which starts in 11 days (July 24) for the Twins. So even if it’s not a significant injury, but is still one that sidelines Buxton for a few weeks, that’s a significant portion of this tiny season. And the Twins have title aspirations following a 101-win season in 2019 that resulted in an AL Central division title.

Update: A huge sigh of relief for Buxton and the Twins, as the center fielder was diagnosed with a mid-foot sprain and is listed as day-to-day. He says he’ll be ready to go by Opening Day.