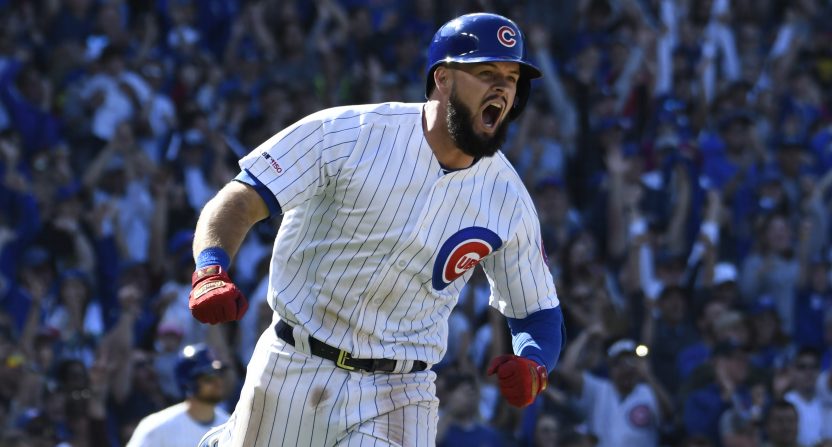 The Cubs are playing better baseball than they demonstrated at the start of the year, heading into today’s game at Wrigley against the Diamondbacks with a record of 9-10. After a blown save from Pedro Strop, though, it looked like maybe the Wrigley faithful could end up going home unhappy.

Fortunately for the home crowd, the Cubs put men on the corners with nobody out in the bottom of the ninth, which brought David Bote to the plate. Bote, no stranger to big walk-off hits at Wrigley, came through again:

For most people, a walk-off hit in front of a home crowd would be the highlight of a lifetime, but for Bote it’s probably not even going to be the highlight of his day. That’s because as soon as the game ended, Bote skipped the media session and went straight from the stadium to the airport for a very good reason:

David Bote not available postgame. Had to leave right away to catch flight to Colorado for birth of his third child. No word if he just kept sprinting out of stadium in uniform.

According to Madeline Kenney in the Sun-Times, this wasn’t unplanned, aside from the walk-off hit:

There was no Gatorade bath for Cubs infielder David Bote after he hit a walk-off single in the Cubs’ 2-1 victory over the Diamondbacks on Sunday at Wrigley Field. He had a flight to catch.

Hours after the game, Bote’s wife, Rachel, was scheduled to be induced in Colorado.

With two on and no outs, Bote singled to right-center field, scoring Javy Baez.

As soon as the flashy shortstop touched home, Bote sprinted toward the Cubs’ dugout. He stopped only for a brief post-game interview with NBC Sports Chicago before bolting to the clubhouse.

Asked if Bote ran out of the ballpark in full uniform, Baez joked, “Yeah, pretty much.”

Have a day, David Bote! Hopefully everything goes as scheduled from here.