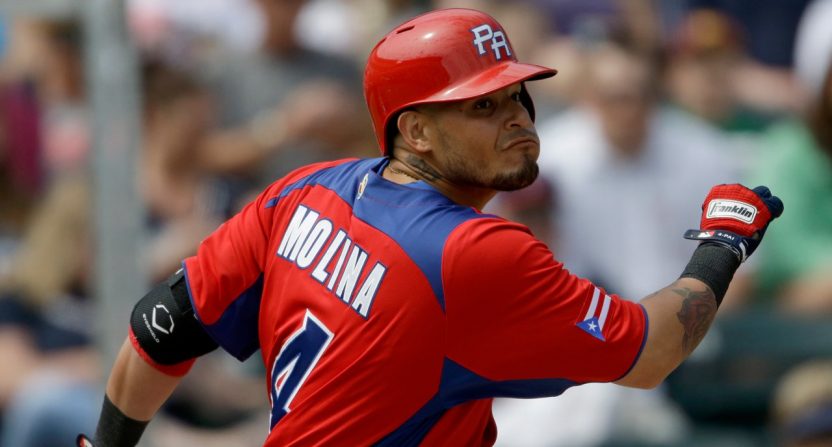 Yadier Molina was playing for Puerto Rico against Mexico Saturday night in the World Baseball Classic in Guadalajara, which Puerto Rico won 9-4. But that quickly became less of a story compared to Molina’s reaction toward a fight that erupted in the stands involving a fan, to which he criticized Major League Baseball on his Instagram page:

This was on Molina’s personal Instagram account, in both English and Spanish. Molina and the Puerto Rico dugout emptied to watch what teammate Javier Baez termed a “brawl” in the stands near the player’s family section at the Estadio de Beisbol Charros de Jalisco.

“All I heard was [Puerto Rico manager] Edwin [Rodriguez] saying, ‘Go back to the dugout,'” Baez told reporters. “I thought it was my team, and when I saw the brawl was in the family section, I saw my family and everybody’s family trying to separate and try to be safe. Well, I got a little bit desperate, yes, because I hadn’t seen what happened, but everything was under control. My family said that everything was OK.”

“At last night’s game, an unfortunate incident resulted from the conduct of a fan in the stands at Estadio de Beisbol Charros de Jalisco. Security staff responded quickly and relocated families to a new area. We will make all efforts to prevent another such situation,” said a MLB spokesman in a statement to the St. Louis Post-Dispatch.

And beyond the Instagram post, Molina did not hold back in a further interview with Marly Rivera of ESPNDeportes.

“Of course, especially in a country that’s not your own, you try to concentrate on the game, but when you see that a brother of a teammate is fighting, literally fighting, throwing punches, you’re obviously going to go defend him, especially when you know there’s no provided security,” Molina told Rivera. “Security should be provided by MLB. There is no one to help us. It’s a shame that this happened, but we’re going to defend our families even if we have to go up to the stands to do it. I honestly think MLB needs to do a better job.”

Molina further went on to criticize hosting the tournament in Guadalajara.

“Security here has not been good. Also, the organization of the event as a whole has not been ideal,” Molina said. “We don’t have good food. The first day, we didn’t have good transportation. It has been mediocre organization of the event. You come here with love and excitement with your family to play and this is nothing against the Mexican fan base. I have nothing against them. I come here happy, but I think since we are professional baseball players, we deserve more attention.”

Puerto Rico advanced to the second round of the tournament to be played in Petco Park later this week with their win over Mexico. They still have one game left to play in the group stage against Italy.