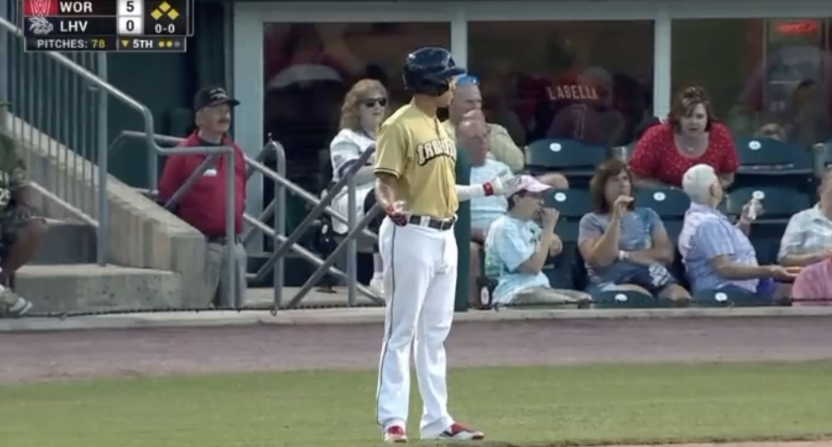 The Lehigh Valley IronPigs took on the Worcester Red Sox on Sunday in what may be the latest argument for baseball to switch to robot umpires in the very near future.

Iron Pigs shortstop Yairo Muñoz walked in the bottom of the fifth inning to load the bases but was ultimately ejected from the game for what seemed to be a massive overreaction by the home plate umpire.

Muñoz took off his shin guard after being walked and tossed it to the ground before jogging to first base. However, he was ejected when the shin guard rolled into the home plate umpire. Home plate umpire James Rackley called over Iron Pigs manager Anthony Contreras and told him that Muñoz had thrown his shin guard at him. Contreras was then thrown out arguing the decision as well.

I have never in my life seen anything like this.

Lehigh Valley’s Yairo Munoz walked to load the bases, as he tosses down his shin guard it rolls back and hits the umpire in the foot and the umpire tosses Munoz. The umpire then tells the manager Munoz threw the shin guard at him https://t.co/FxNrFtysTA pic.twitter.com/tqmjEgJ4Q5

It was pretty clear that if Muñoz was trying to throw the shin guard at Rackley, he could have done it far more aggressively than what was shown here.

Many baseball fans took to social media to let their opinion on the incident be known, with almost everyone blasting Rackley for making it about him.

This umpire is a clown https://t.co/Wah1VJ0BLz

I think robot umpires would be bad for baseball, but if the option is between umpires like this and robots, I’m taking the robots 11 times out of 10. https://t.co/4hUQNI51zp

Man it’s no way you should want folks like this in your game. Literally making your product so much worse https://t.co/QTQGSEAvnO

Wow someone better check on that umpire's leg, it could be shattered after that kind of attack https://t.co/zlTwwvbOTJ

When an ejection as egregious as this happens at any level of baseball, it becomes more and more clear that umpires need to be held accountable, just like players, for their poor decisions.

While this was ultimately insignificant in the end result of the game, with Worcester winning pretty comfortably, losing both a manager and a player for such a small gesture seems ludicrous.