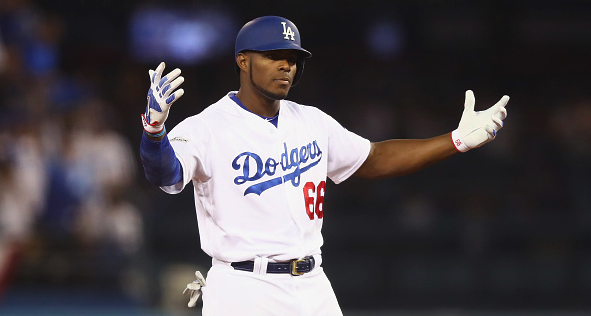 Among current MLB players, there may be no more polarizing figure than Los Angeles Dodgers outfielder Yasiel Puig. Some think he brings fun and enthusiasm to baseball, while others feel that he disrespects the game — especially when arguably overreacting to a play that doesn’t warrant such a gesture.

We saw another example of that during Game 1 of the National League championship series between the Dodgers and Chicago Cubs Saturday night. With the score tied at 2-2 in the fifth inning, Puig crushed a double into the left-center gap with the ball landing at the base of the wall.

But the Dodgers star irritated some observers by flipping his bat after the hit, a punctuation typically reserved for a home run. (And even with a home run, many don’t like the bat flip, believing that it shows up the pitcher and is a grandstanding gesture that doesn’t have a place in the pastoral national pastime. Never mind that bat flips are commonplace among Latin and Asian players when playing in their native countries.)

Yasiel Puig with the bat flip and a one out double! Dodgers 2 Cubs 2. #ThisTeam #LetsGoDodgers pic.twitter.com/SeH96FhJM1

Puig’s double was a big hit, driving in Logan Forsythe to break the 2-2 tie and put the Dodgers ahead for good. But the bat flip, holding up his arms and admiring the hit, and exhorting the crowd after stopping at second base was just too demonstrative for some fans. (OK, maybe the crotch chops were a bit much.)

One observer who was irritated by Puig’s display was former ESPN anchor and commentator Keith Olbermann.

Puig went on to add a home run in the seventh inning, increasing the Dodgers’ lead to 4-2. As Olbermann later admitted, he would’ve been fine with a bat flip there. Just limit those demonstrations to home runs, he said.

Still, Olbermann came off rather curmudgeonly, shaking his fist at a player for daring to show some enthusiasm on the field. Sure, Puig’s act can wear thin — and has with teammates and coaches. But when the guy gets a big hit in a postseason game, let him acknowledge the moment and his contribution to it.

Puig found out about Olbermann’s gripe after the Dodgers’ 5-2 victory and couldn’t resist needling the broadcaster.

Hey @KeithOlbermann I flip on singles and doubles & not on homers. Come watch the show. Need a ticket? I got you #PuigYourFriendToo ? https://t.co/7Ror8AyGRg

OK, that was a good-natured elbow in the ribs from Puig, but wasn’t mean-spirited. So it would’ve been a bad look for Olbermann to respond angrily. Fortunately, he was a good sport about Puig poking back at him.

Well if you’re gonna be THAT way about it I guess I’ll have to say yes, and apologize to you ⚾️?? #OlbermannYouFriend https://t.co/rznaV0LdTn

An apology from Keith Olbermann! Puig has a disarming, diplomatic touch that wears everyone down. Maybe a #PuigYouSecretaryOfState should become a trending hashtag.

How often Olbermann or others on Twitter have the opportunity to use the #OlbermannYouFriend hashtag is something that will certainly be worth monitoring. But with that, there was some peace. At least for 24 hours or so. This could be revisited a few times during the Dodgers’ postseason run.

I still don’t know why my bats are so slippery ???? pic.twitter.com/uHVT2d9gke