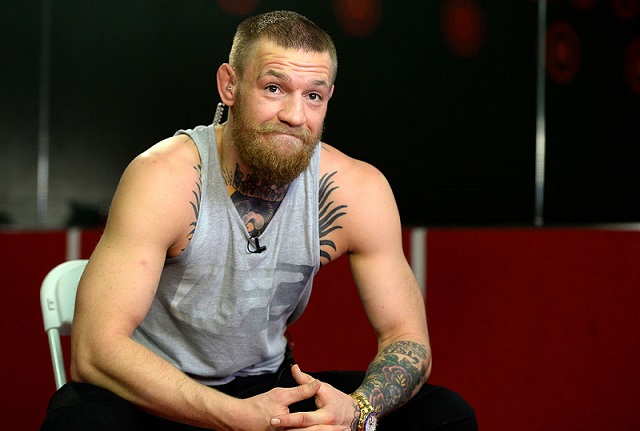 “Not a money issue,” UFC president Dana White said on Wednesday, quite literally the morning after Conor McGregor turned the mixed martial arts world inside-out. “Never, ever, was this about money.”

Which is true, of course, in at least some sense. After all, McGregor is an incredibly wealthy man. So, too, is White. And neither of those two realities figures to change, no matter how their standoff unfolds from here. Money? Money is a secondary concern. The battle between the UFC’s president and one of the biggest stars in the promotion isn’t about wealth.

It’s about power.  And that might make it even more difficult to solve.

On Tuesday, Conor McGregor made a full display of the scope of his power, where else, but in the sports-media infested waters of Twitter.

I have decided to retire young.
Thanks for the cheese.
Catch ya's later.

One tweet. Thirteen words. Probably oh, 30 seconds or so of time spent, from the Reykjavic, Iceland gym where he’s been training for his UFC 200 rematch with Nate Diaz.  And suddenly, every man, woman, and child with even a cursory interest in combat sports was asking the same question.

Is this for real?

Two days later, we have the answer, thanks to the rather colorful statement that McGregor released on his Facebook page Thursday morning. (Say what you will about Conor, but he’s clearly determined to make sure a variety of social media platforms all get their shine.) No, the reigning featherweight champion explained, he’s not really retired, he has simply become “lost in the game of promotion” and decided that he “can not dance for you this time.” Oh, and perhaps it’s time for the UFC’s bookers to raise their standards, because “Tim and Suzie on the nobody gives a f*** morning show” does indeed sound like a poor use of McGregor’s time. (I’m just curious though, does that show feature a cooking segment?)

The fact that one man’s verified accounts could send the fighting world into such a frenzy left no doubt about the influence, clout and leverage that he holds. It’s hardly the first time that McGregor has flexed his proverbial muscles within the sport, of course. There’s been talk of “co-promoting” fights with parent company Zuffa, showing up fashionably late to press conferences, and, oh yes, there was that time when the Notorious One shamed the UFC’s art department into redoing the poster for his bout with Rafael Dos Anjos.

Were any of these skirmishes about money? No, not directly. But life is a game of chess, and this week, Conor McGregor made his most aggressive move yet. Few observers truly believed that a 27-year-old world champion who routinely draws millions of eyeballs around the world had no interest in continuing his career. Nearly every suspected, and now McGregor has confirmed, that he was really just looking for something. A better seat at the table? A promotional calendar that fits into his schedule? A little extra coin to sweeten the deal?

Perhaps Conor McGregor simply wants whatever he wants, and he wants all of us to know that he can get it.

On Wednesday, Dana White attempted to take the power back. During an interview with Fox Sports’ Colin Cowherd, the public face of the UFC tried to suggest that it’s full speed ahead, with or without McGregor.

Well, sure, but the problem for White is that Ali, Leonard, and Tyson aren’t available for this fight. So, suddenly, one of the biggest events in the history of his promotion has a gigantic, tattooed, trash-talking, Irish flag-waving hole at the top of the card. Not that White is at all concerned, of course.

Indeed, plenty of competitors are assuredly angling for McGregor’s spot. (One of the many consequences of the UFC lacking a union is that individual interests will always trump any sort of solidarity among fighters.) But here again, White papers over the undeniable fact that yes, sure, he’s got plenty of competitors, but only one Mystic Mac. And if you need further proof, all you have to do is ask, well, Dana White!

Apparently, White and the UFC have finally reached a point where they could “roll with it” no longer. Just don’t expect us to believe that his departure wouldn’t be a serious blow to the bank account. For many months now, the company has gone out of its way to tout the attendance, the gate, the PPV buys, the incredible records that are set every time McGregor marches to the octagon. Yes, the show will go on for the UFC, but it’ll also be a lot less lucrative. Which probably has a lot to do with why, even as he attempted to draw a line in the sand, White struck a tone that was so accommodating, even conciliatory.

“Our relationship isn’t damaged at all,” White assured Cowherd. “(McGregor) is a very reasonable guy.  He’s a smart guy… Conor for the most part is a stand up guy, he’s never come back after agreeing on a deal, and then the fight’s announced, and he comes back for more money. He’s not that kind of person…. Swear to god, I’m not mad, even a little bit.”

Which is interesting, given that White was more than a little mad, back in 2011, saying he would “never trust Nick Diaz again” after the fighter no-showed a scheduled press conference for UFC 137.  Or back in 2012, when he called Jon Jones’ decision to refuse to fight a new opponent on short notice “disgusting and selfish.”

The bottom line is that White has never been shy about sharing his true feelings, and his efforts to keep things calm, civil, and business-like with McGregor speak volumes about just how important the relationship remains.

If the battle over UFC 200 truly was about money, it might actually be easier to solve, because Conor McGregor generates plenty, and Zuffa has a lot to throw around. Instead, two sides have gotten themselves locked in a battle of wills, and it’s hard to predict exactly where things go from here.

On one side is an supremely talented, captivating, willful fighter, eager to prove that his very existence is the real draw, and that mandated promotion is a waste of his time. On the other is a company that has essentially built an MMA monopoly, and whose strength in the marketplace depends on being bigger than any individual who comes along, regardless of the records they set. McGregor must yield, the UFC will undoubtedly contend, because his exemption from the tour would set a dangerous precedent.

But any real question about the power dynamic, in this relationship, was put to rest once White admitted that yes, McGregor could put the whole thing back together, could leap right back to the top of the card, could take the place of either “To Be Announced” or “To Be Determined” on the UFC 200 website, if he would just pick up the phone and play ball.

“We do give Conor a lot of leeway,” White acknowledged at the close of Wednesday’s interview, “because Conor delivers.”

And sooner or later, when Conor McGregor is ready to deliver another truckload of money to the UFC, they’ll be ready to make peace. There’s always a way to save face after all, for two sides to find some sort of compromise that enables them both to come away looking as high and mighty as ever.  The battle for power is all well and good… until it gets in the way of the bottom line.