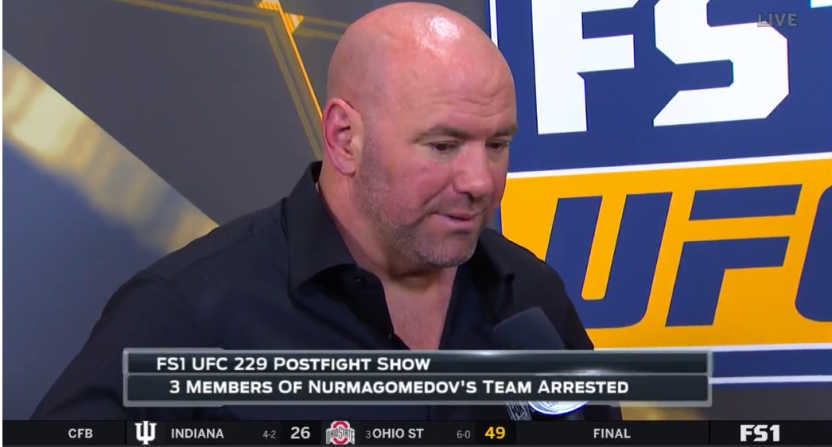 Khabib Nurmagomedov defeated Conor McGregor via fourth-round submission in UFC 229 in Las Vegas on Saturday night. But the main story from the event turned out to be an ugly postfight brawl.

After Khabib runs into the stands, go to the :30 second mark and you can see Khabib's teammate/friend in red jump into the octagon and sucker punch McGregor in the back of the head. #UFC229 pic.twitter.com/MNS7srsE8q

Here’s the brawl with Khabib jumping the fence and going after Danis. You’ll see somebody go after McGregor in the cage. This is bad. pic.twitter.com/IpOZiZy5vC

More from the brawl: One of Khabib's teammates pointing and yelling at Dillon Danis after everything briefly settled down. #UFC229 pic.twitter.com/jFD6IxIG55

Dana White says of the three members of Khabib's team who were briefly arrested, if any of them are UFC fighters, "then they will not fight in the UFC." #UFC229

“Three guys have been arrested. There are going to be charges filed against them, I’m sure. God knows what the Nevada State Athletic Commission is going to do to Khabib and his guys. Are these guys ever going to get a visa again to get back into this country? There’s a lot of repercussions from what they did tonight, ones that I don’t think they even realize yet.”

White added to ESPN that Nurmagomedov could face suspension, and that the Nevada State Athletic Commission was holding Nurmagomedov’s purse.

White told ESPN it was “a very bad night” for the UFC, saying that Nurmagomedov could earn a suspension.

White told ESPN the Nevada State Athletic Commission was holding Nurmagomedov’s purse. However, the commission has paid McGregor after reviewing tape and concluding there was no need to withhold his check, he said.

McGregor won’t press charges on Nurmagomedov’s team, according to White.

And a look at Nurmagomedov being escorted out of the arena.

Here’s video of Khabib being escorted out of the arena with police and security. pic.twitter.com/D9gjsesdwl

You can get a better sense here of how much Khabib was being protected by police and security out the arena. pic.twitter.com/W3u9k5FfrF

There’s sure to be much more to come from this story in the coming days.