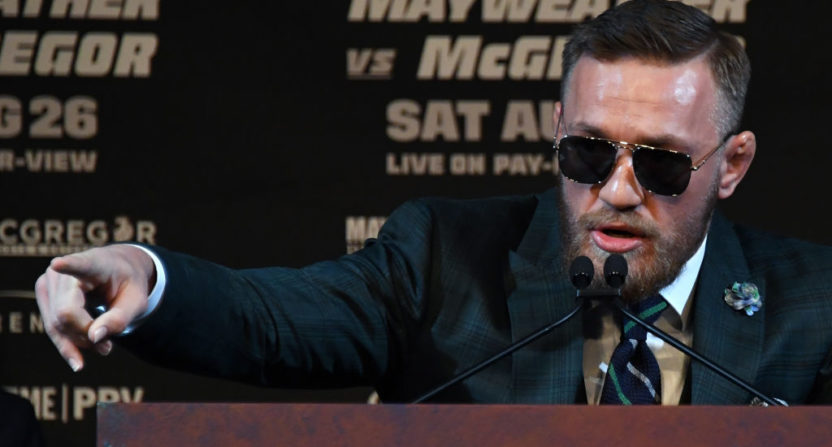 This week: 50 Cent thinks he can beat Conor McGregor in a street fight, “The Notorious” gets served with a frivolous lawsuit, Rousey to WWE heats up, and your MMA nickname battle of the week!

50 Cent appeared on Watch What Happens Live and said he would have no problem beating Conor McGregor in a street fight. “In the street? Yeah! C’mon, he weighs 150 pounds, man!” I’d like to offer 50 some advice with some lyrics from a rap song he must be familiar with: “Check yourself before you wreck yourself.” Let me explain something to 50. A Jiu-Jitsu white belt with three months of training would choke him out or snap something on him in less than sixty seconds. It doesn’t matter how much someone weighs. It doesn’t matter how much you can deadlift. If you have technique and you’re up against someone without formal training, it’s game over. Quickly.

Remember when Conor McGregor went off and started throwing bottles of water and energy drinks at the UFC 202 press conference? He’s being sued for that because of course he is. A security guard at the press conference, one William Pegg (loved him in Hot Fuzz), claims he was hit in the shoulder by one of the bottles McGregor threw. Pegg is seeking a cool $95K in damages, and how he — and/or his local TV commercial lawyer — came up with that figure is slightly insane. The Blast has the goofy details:

When you seek hospital care for being hit by a water bottle coming in at about 8 MPH, you probably aren’t very good at being a security guard.

Jon Jones Would Never Do Roids, You Guys

The bag of excuses for testing positive isn’t very big, so unremarkably his agent put his hand in and came back out with the ‘ol tainted supplements defense. This was after they wanted Jones’ B sample tested — and after that also came back positive. It’s a shame. He was undeniably on his way to being the best mixed martial artist of all-time. Now his career might be over.

When Jones’ B sample came back positive, the UFC stripped him of the light heavyweight title (for a third time) and Cormier was officially reinstated as the champ. He talked about it on UFC Tonight.

Before the UFC, before MMA, a couple of guys named Bill Viola and Frank Caliguri dreamed up a sport in which no holds were barred and people could truly find out who the toughest guy was. Tough Guys premieres Friday, September 15 on Showtime.

Hey, speaking of tough guys, Ed Herman is one of them. Not just because he’s had a lengthy career in MMA, but also because he did this to his finger and showed the world. He offered different angles of the severed finger on Instagram and Twitter. How’s that for marketing? Warning: Major Gore.

His Twitter followers received a different angle of the disfigured digit:

Yeah buddy #warning graphic picture lost the tip of my finger today could have been worse ? pic.twitter.com/jzauDro9d2

Herman explained how it happened. “Released a pipe clamp before I should have while replacing my well pump and my instincts grabbed it sucked my hand into the wellhead.” I’m never going near a pipe clamp. Or a well pump.

Gilbert Melendez, aka “El Nino,” was the recipient of many leg kicks during his UFC 215 fight with Jeremy Stephens last Saturday. The result was not pretty.

Hey All. Everyone is asking about Gilbert's leg. Here is a pic today. He is doing A ok. Thank you to all for the support. We feel the love pic.twitter.com/VQpNj7JlTO

Adding to the pain of the injury was that Melendez suffered his fourth consecutive loss. All four came by way of top contenders, but at age 35, it looks as if Melendez has moved from title contender to gatekeeper. In his 29 pro fights, Melendez has never been knocked out or finished by TKO.

Former UFC fighter Shayna Baszler made it to the finals of WWE’s Mae Young Classic, and she was cheered on by her three friends: Ronda Rousey, Jessamyn Duke, and Marina Shaffir, collectively known as “The Four Horsewomen.” You can see that tournament on the WWE Network. The rumors of Rousey going to the WWE have been around for years, and she even showed up to do some damage at Wrestlemania in 2015. She had nothing but great things to say about the WWE Performance Center in an interview with ESPN.

John Canton does an excellent job covering and breaking down the WWE for The Comeback, and last week he wrote a great piece on how the women’s revolution is just getting started in the WWE. Adding “The Four Horsewomen” would be a great boon for the WWE and make that division even more interesting.

The Nickname battle of the week returns with some solid fare. UFC Fight Night: Rockhold vs. Branch goes down Saturday night and we dig the matchup between Kamaru “The Nigerian Nightmare” Usman and Sergio “The Panther” Moraes. Usman is ranked 13th in the UFC welterweight division and looks to be a legit contender. He’s 5-0 in the UFC, including winning “The Ultimate Fighter” back in 2015.

The genesis of his nickname doesn’t contain a witty story. He’s from Nigeria and he’s a nightmare to face in the cage. We haven’t had a good Nigerian Nightmare since Christian Okoye was running over linebackers and safeties for the Chiefs, so it’s good that we have one again. Moraes goes by “The Panther,” and I like that as his heroes he listed “Hulk and Wolverine.” The 35-year old hasn’t lost since 2012 and a win over Usman will vault him into the top-15.