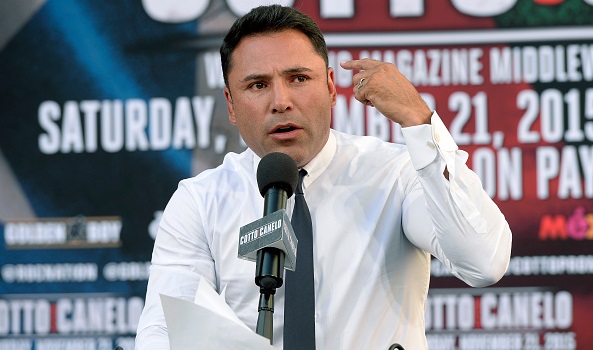 This week: Oscar De La Hoya wants to come out of retirement to fight you-know-who, former WWE star signs with Bellator, UFC fighter throws boomerang at another fighter in Australia, and much more!

The last time Oscar De La Hoya fought was just about nine years ago and his opponent was Manny Pacquiao. De La Hoya was well behind on the scorecards, but it didn’t matter because he quit before the start of the ninth round. Had he gone back to battle in the 10th, he would have been knocked out.

But at the tender age of 44, De La Hoya made it known he would like to come out of retirement for one last fight. The opponent? Conor McGregor. “I know I can take out Conor McGregor in two rounds. I’ll come back for that fight. Two rounds. Just one more,” De La Hoya said on Golden Boy Radio. “I’m calling him out. Two rounds, that’s all I need. That’s all I’m going to say.”

Will you watch? Will you pay to watch? Stay tuned.

Conor Is Sorry, You Guys

You’ve heard of the humble brag? Here is the not-so-humble apology.

I sincerely apologize for my behavior at last weekends fight event in Dublin. While trying to support a loyal teammate and friend, I let my emotions get the best of me and acted out of line. As a multiple weight UFC champion, executive producer, role model and public figure, I must hold myself to a higher standard. The referee Marc Godard was making a horrendous decision in trying to pick an unconscious fighter up off the floor and force the fight to continue into the second round. Even against the wishes of the said fighters coach. The fight was over. After witnessing my fighter in a fight where the worst happened and the opponent passed away from his injuries on the night, I thought the worst was about to happen again, and I lost it and over reacted. I am sorry to everyone. I sincerely apologize to the Director of the Mohegan Tribe Department of Athletic Regulation, Mike Mazzulli, all the officials and staff working the event, Andy Ryan and his fighter John, two stonch ones that put up a great fight every time. That side will always have my respect, and lastly every one of my fans. I love yous all! I’ve always learned from my mistakes and this will be no different.

My favorite line: “As a multiple weight UFC champion, executive producer, role model and public figure, I must hold myself to a higher standard.”

Role model? For who? You spent a week this past summer spitting out obscenity after obscenity into a microphone for the whole world to hear. You used to claim you’ll fight anyone, anywhere, at any time, but now your ego is so over-inflated you won’t come back to fight unless you are billed as a “co-promoter” with the UFC.

Meanwhile, a division full of savages await to fight you and you won’t oblige them. Aren’t you glad none of your opponents pulled this type of stuff when you were on the way up? Careful now, Conor. The UFC and its fans lived without Randy Couture back in the day. Jon Jones is already a distant memory. Ronda who? Go sign a contract to fight and defend your title — if it doesn’t take too much time away from your “executive producing” duties.

Cyborg and Holm All Set for UFC 219 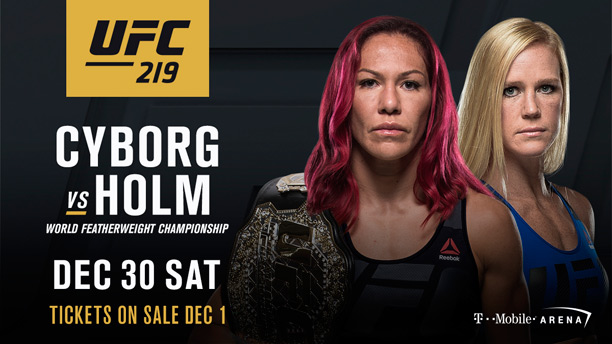 Holm makes the move to the new featherweight division after a rough stretch in the bantamweight division where she lost three straight fights before knocking out Bethe Correia in June. She took down Ronda Rousey at UFC 193 to win the bantamweight title at a time when Rousey was considered unbeatable. Cyborg is still considered unbeatable having won 17 straight fights dating back to 2005.

This is a must-see fight. If Holm wins, she will become the first-ever female multiple-division UFC champ.

I swear this isn’t fake news. Former UFC heavyweight champion Fabricio Werdum is in Sydney to fight Marcin Tybura. Colby Covington, who apparently fancies himself as the next Conor McGregor, is also there and the two had a confrontation. Werdum actually throws a boomerang at Covington’s face.

I suppose when you denigrate an entire nation of people and call them savages and filthy animals — like Covington did recently with Brazil — it’s possible you will get a boomerang thrown in your face. I’ll take sentences I never thought I’d write for $500, Alex.

The Patriot Lock is coming to MMA. Jake Hager, better known as Former WWE champion Jack Swagger, has signed with Bellator MMA. Hager was a D-1 wrestler and football player at the University of Oklahoma who went on to become the WWE Heavyweight Champion, as well as the United States Champion.

Hager told The MMA Hour he plans to make his debut in 2018. Making the leap to professional MMA at age 35 is a rarity, but Hager will always have a solid wrestling base to fall back on. Once you’ve take a “Codebreaker” from Chris Jericho, I imagine getting punched in the face is like a tickler.

Bellator is getting back in the tournament business. The promotion announced this week it has plans for a heavyweight Grand Prix featuring eight fighters: Former UFC heavyweight champion Frank Mir, MMA legend Fedor Emelianenko, Matt Mitrione, Roy Nelson, Ryan Bader, Chael Sonnen, Rampage Jackson, and King Mo Lawal. Those last four have traditionally fought at light heavyweight but they are making the move up. Six of the fighters have UFC experience, while King Mo is a former Strikeforce title holder and Fedor is Fedor.

“I think there are certain fights that people want to see,” Bellator president Scott Coker said. “Believe me, we’re going to have some amazing matchups in this tournament. These fights that we’re going to put together are something that the fans want to see. These are iconic names, big brands.” The tourney will begin early in 2018 and finish by the end of the year.

Matt Brown fought Diego Sanchez last weekend and it seems almost certain that will be his retirement bout. If so, Brown went out in amazing style.

WHAT AN ELBOW! Matt Brown KO's Diego Sanchez for the finish at #UFCNorfolk! https://t.co/i7MIUI1rXE

Brown was one of the most-exciting fighters in the UFC during his time with the promotion. He always pushed the action and his brawling style was much appreciated by fans. That may be the last time we see him in the Octagon, so let us issue a sincere thank you and firm virtual handshake. If Matt Brown was on the card, it was always worth watching.

The UFC is in Sydney for UFC Fight Night 121: Werdum vs. Tybura and we’ve decided on Rashad “Daywalker” Coulter vs. Tai “Bam Bam” Tuivasa for our famous MMA Nickname Battle of the Week.

Coulter makes his second appearance in this feature and with good reason. Unlike some fighters, Coulter’s nickname actually comes with a funny backstory. Bellator fighter King Mo introduced to the sport and gave him his nickname. “He always said I was the palest black person he knew. Said I was a pale as a vampire and I am Daywalker because I am a pale vampire that can walk in the daylight.”

As for Tuivasa, he makes his UFC debut this weekend and we assume he is called “Bam Bam” for his big power. The Australian Fighting Championship heavyweight champ is 5-0 and has finished all five of his fights in the first round. These are two big heavyweights and someone is likely going to sleep in this fight. You can catch this one during the prelims on FS1.