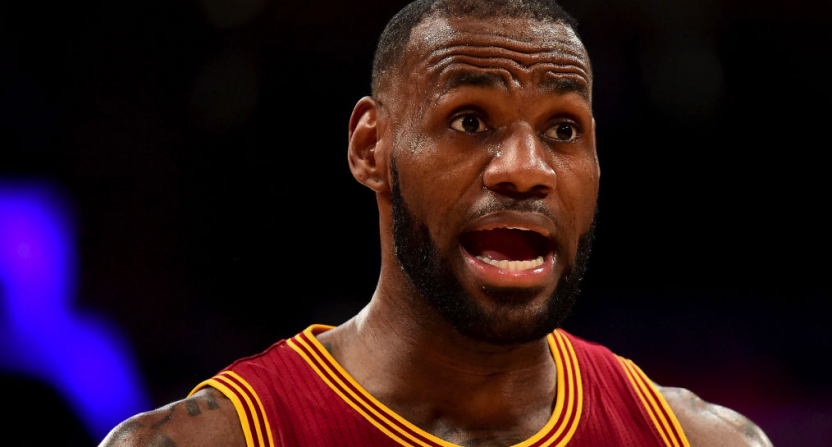 There are exactly two weeks left in the 2016-17 NBA regular season and now that March Madness is winding down, it’s time to catch up with what’s been going on in professional basketball.

Let’s take a look at the biggest questions surrounding the league as we hit the stretch run to the postseason.

1) What the hell is going on with the Cavs?

All of a sudden, Cleveland has lost three of four, and four of six, and have split its last 10 games to fall behind Boston to second in the Eastern Conference. Why? Mainly because of the team’s defense, which has been one of the worst in the entire league since the All-Star break.

No team has had a worse defensive rating in March than the Cavs’ 114.5, per NBA.com, and the team is starting to press a bit.

There’s still plenty of time for the defending champs to turn things around, but the worry and panic level right now in Cleveland right now is high.

It’s basically a three-man race at this point between James Harden, Russell Westbrook and Kawhi Leonard. How you see the race turning out is predicated on your school of thought.

If you’re in the Harden camp, you’re probably more of a traditionalist. He’s putting up nearly 30 points, over 11 assists and eight rebounds per game for a championship contender. MVPs play for title contenders and always have, and Harden’s been Houston’s excellent catalyst all season.

If you’re on Team Westbrook, you think that it’s impossible to not give Russ the MVP if he averages a triple-double for the season — including an absurd 57-13-11 3×2 on Wednesday night — which appears likely. It doesn’t matter that Oklahoma City is sixth in the Western Conference because the Thunder would be so horrific without him.

Then there’s the group of people who think MVP should look at both offense and defense. And Leonard is by far the best two-way player this season, combining lockdown D with averaging 26 points, six rebounds and 3.5 assists per game.

One way or the other, MVP is a regular season award. So the next two weeks will solidify a winner from one of these three.

3) Who’s the biggest threat to the Cavs right now in the Eastern Conference?

Right now, the Celtics and Wizards are really threatening Cleveland as the postseason approaches. Boston is just percentage points behind the Cavs for the top seed in the conference and Washington is just two games back after walloping Cleveland, 127-115, on Saturday.

But don’t look past last year’s East finalists, Toronto, just yet. After a disastrous midseason slump, the Raptors have won six of seven to get within three games of the Cavs in the standings. Can any of these three teams actually beat LeBron and company in a best-of-seven series? I wouldn’t bet on it, but Cleveland’s stock is quite low at this current moment.

4) Who wins Rookie of the Year?

There are even fewer viable candidates in this race than in last year’s presidential election. Had Joel Embiid played in more than 31 games this season, he’d be a lock for this award. But excelling in 31 games can’t win you this award. So we move on to others.

Only two eligible rookies have averaged more than 10 points per game: Philadelphia’s Dario Saric and Milwaukee’s Malcolm Brogdon. Sacramento’s Buddy Hield and Dallas’ Yogi Ferrell are at 9.9. Hield has come on strong since being traded to the Kings in the DeMarcus Cousins trade, averaging 14 points and nearly four rebounds per game on 47.7 percent shooting from the field and 41.7 percent from three.

If Hield doesn’t do enough over the final two weeks to grab the award, it should go to the Bucks’ Brogdon. Action Brogdon is averaging over 10 points and four assists per game, is hitting 40 percent from three for the season and is the only candidate whose team will actually make the playoffs. ROY is a pathetic battle, but an interesting one.

It’s basically a two-team race to determine who will be quickly and viciously eviscerated by Golden State in the first round of the playoffs.

Portland has won four in a row and eight of 10 to grab a one-game advantage over Denver with eight games remaining. The Blazers won Tuesday’s head-to-head matchup, 122-113, behind 39 points from C.J. McCollum, but their remaining schedule is tough.

Portland has Houston, San Antonio and Utah at home and a road game against the Jazz left, while Denver will play six of its last eight on the road, including at Houston and a home and home with Oklahoma City. This is going to be a fun run to the finish between these two teams.

6) Which team is the biggest threat to the Warriors?

Golden State just beat its two top foes in the conference on consecutive nights, coming back from 23 down to beat San Antonio on Wednesday and defeated Houston on Tuesday. The Warriors have now won nine straight games without Kevin Durant going into a weekend stretch against Houston and Washington.

The Rockets can keep up with the Warriors offensively, and the Spurs have the league’s best defense. One of those two teams poses the largest challenge to Golden State’s third straight NBA Finals appearance, but they appear to be meager threats at best at this point.

7) How will the East shake out?

As of this posting, fifth and 11th place are separated by a mere five games in the Eastern Conference standings.

Atlanta and Milwaukee are probably secure, but Indiana has been really struggling and Detroit has lost five in a row to fall out of the picture with seven games left in its season. After an 11-30 start, Miami making the playoffs would be an incredible accomplishment and would be doubly sweet if the Heat can keep Dwyane Wade and the Bulls on the outside looking in.

8) Who are some sleeper teams going into the playoffs?

Utah has the league’s best scoring defense, and will be tough to go up against in the postseason when games tend to slow down. Oklahoma City’s athleticism and experience from last season could benefit the Thunder in the first round.

In the East, Milwaukee’s athleticism and Giannis Antetokoumnpo’s insane abilities will make them a sleeper. And if Miami makes it, its chemistry and camaraderie should make for a fun story if Cleveland is its first round foe.

9) What’s going on with the race to the bottom?

For teams way out of the race, the Tankathon is on!

Brooklyn has basically clinched the worst record, to the delight of the Celtics, who will be getting the Nets’ pick in a swap as part of the Kevin Garnett-Paul Pierce trade. If the Lakers don’t get one of the top three picks, their pick goes to Philadelphia. And if Sacramento ends up with a better lottery position than the Sixers, Philly has the right to swap with the Kings as well. Benefits of the process. 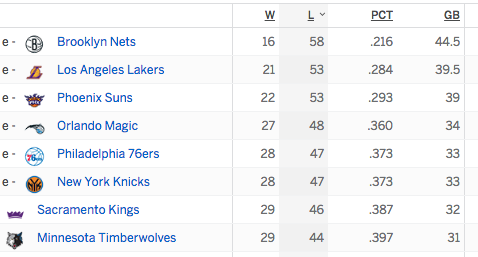 10) What are the top potential first round playoff matchups?

In the East, any matchup featuring Giannis and the Bucks is going to be a lot of fun, especially if they’re playing Boston or Washington. But out West is where things really get fun.

Golden State-Portland with Steph Curry and Klay Thompson going up against McCollum and Damian Lillard would be great. Houston-Oklahoma City with Harden facing Westbrook in a best-of-seven series? That would be incredible. Even a matchup between the Jazz and Clippers would be really compelling.

The NBA regular season has two weeks left, and there are so many compelling reasons to watch and get excited going into the playoffs.