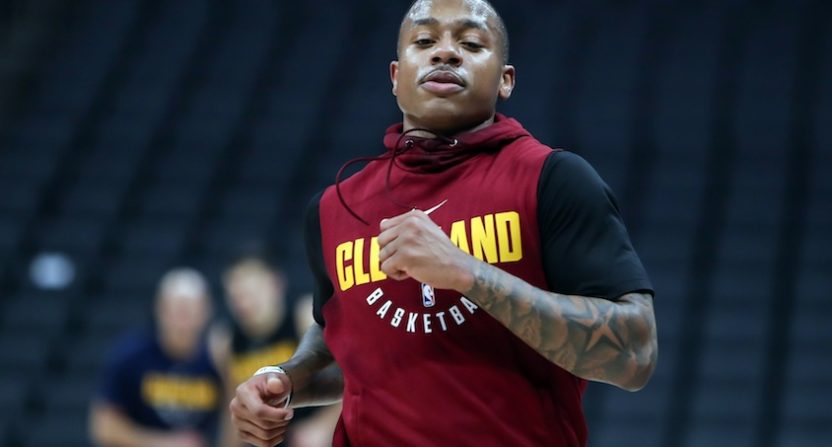 Despite being midseason in the NBA, January is a month of beginnings for the national television schedule. ABC starts its regular primetime Saturday and Sunday games, while TNT debuts its Tuesday night doubleheaders.

And with that are plenty of elite matchups, highlighted by a juicy twinbill on Martin Luther King Day (Jan. 15). But it begins with a huge week for the Cleveland Cavaliers.

** All times listed are Eastern

The moment Cavs fans have been waiting for is here. Isaiah Thomas makes his debut for Cleveland against the Blazers, finally giving the league its first glimpse at what this team will be like at full strength. Thomas is a dynamic scorer in his own right, having averaged 28.9 points per game last season, so it’ll be interesting to see how he’ll be integrated into this Cavalier offense.

Portland is no slouch either, having won three of four and should be getting an excellent point guard of their own back in Damian Lillard, who will be back in the lineup after missing the last five games with a right hamstring injury. Thomas will have a tough test right away in his first game back.

In his second game of the season, Thomas returns to Boston, where he had his best years as a player before being dealt to the Cavs in the Kyrie Irving trade. (The Cavs announced, however, that Thomas won’t play against the Celtics because he hasn’t yet been cleared for back-to-back games.) It’s also the teams’ first matchup since opening night in October, when Cleveland won by three after Gordon Hayward’s gruesome season-ending injury.

Expect an electric TD Garden crowd and some inspired play from Irving, who scored 22 points and dished out 10 assists in their first matchup.

Very quietly, the Spurs are 25-12 and are allowing the fewest points per game, 98.1, in the league. That record is third in the West and a half-game better than Cleveland, a team we hear about a hell of a lot. All this has been accomplished with Kawhi Leonard only playing six games so far in 2017-18.

A major reason for San Antonio’s success has been LaMarcus Aldridge, who’s averaging 22 points and 8.4 rebounds per game, a statline reminiscent of his days with the Blazers. Aldridge returns to the Moda Center to play Portland on this Sunday night, a reminder of his All-Star days. Based on his current numbers, LMA should return to the midseason showcase again this season.

London will get two young, really dynamic teams in this Atlantic Division battle from… across the Atlantic (sorry, had to) at the O2 Arena. Hopefully, Joel Embiid will remain healthy as he opposes Boston’s true fulcrum, Al Horford. In this exciting matchup, Ben Simmons won’t be the only Big Ben in the vicinity (sorry, had to).

Here are some Sixers players trying to translate some common British terms:

Before heading over for #NBALondon against #Celtics on 11th January, we gave the @Sixers a crash-course in some important British words they might need while in town! ?? pic.twitter.com/AZ0CMpR2Ri

We’ll hopefully get to see these two teams at full strength this time, with Stephen Curry likely back from his ankle injury for the Warriors and Thomas back and healthy for the Cavs. The first matchup on Christmas Day came down to the wire, with Golden State escaping after questionable non-calls on Kevin Durant, who seemingly fouled LeBron James as he drove to the rim late in the fourth quarter of the Warriors’ win.

This will be the second and final regular season matchup between these two, with a possible fourth consecutive NBA Finals meeting in June a definite possibility. This is one you cannot miss.

The second half of the Martin Luther King Day doubleheader is a doozy, with Chris Paul returning to Los Angeles for the first time as a member of the Rockets.

Paul missed the teams’ first meeting of the season, a 128-118 loss to the Clippers on Dec. 22, with a left adductor strain and James Harden will likely miss this matchup as he recovers from a hamstring injury. So it’ll be Paul’s show at the Staples Center in primetime against his former team. Not a bad nightcap.

If the playoffs began today, this would be the 4-5 matchup in the Eastern Conference. Detroit had a great start and survived a seven-game losing streak that spanned the first half of December. Washington has won seven of 10 and is looking like a contender again with John Wall back in the lineup.

Hopefully, Pistons fans will fill up new Little Caesars Arena for the matchup. The team is currently 23rd in attendance despite a new arena and a winning team.

ABC’s regular game coverage begins in earnest on this Saturday, starting with OKC-Cleveland during the day and a nightcap featuring the West’s two best teams. The two teams will also play this Thursday (Jan. 4) on TNT, but Harden’s injury knocks that matchup out of the 10 to watch. But the game should still live up to the billing, as Houston has the tools to be Golden State’s biggest threat in the conference since their iconic run began.

TNT’s second half of the season weekly doubleheaders on Tuesdays begin with the Cavs and Spurs clashing from San Antonio. Let’s hope we get to see a lot of Kawhi Leonard guarding LeBron James, the league’s best defensive player (sorry, Draymond Green) on the league’s best offensive player (sorry, Kevin Durant). The second half of the twinbill has the Celtics visiting the Lakers, with L.A. wondering what could’ve been had it drafted Jayson Tatum instead of Lonzo Ball.

If this game is anything like their first matchup, we’re in for a treat. The Celtics shut down the vaunted Warriors offense on Nov. 16, a 92-88 victory that was the highlight of their 16-game winning streak.

Stephen Curry shot 3-for-14, Klay Thompson shot 5-for-18 and Draymond Green shot 3-for-11 in that game. That will certainly be on their minds as the month of January ends with a potential NBA Finals preview.