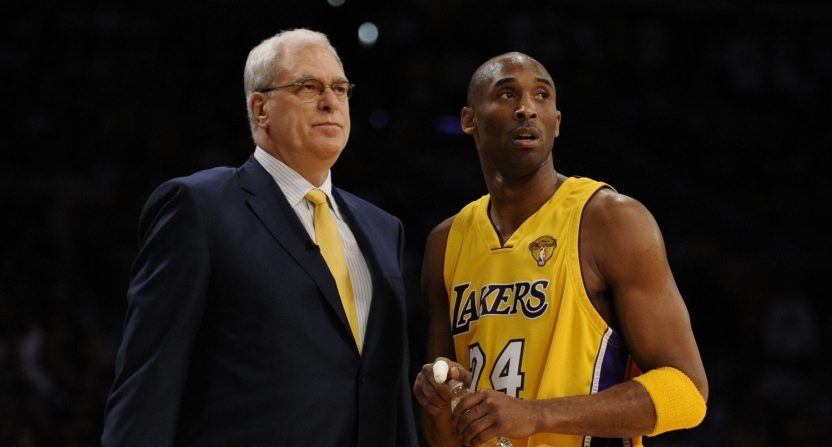 As the NBA looks to restart in late July, the Los Angeles Lakers are one of the betting favorites. No one knows how exactly the playoffs will play out in a neutral site postseason without fans. If the Lakers win it all, it will be their first title in a decade.

The 2010 championship marked the final one for Kobe Bryant, as well as ringmaster coach Phil Jackson. After Bryant hoisted the Larry O’Brien trophy for the fifth time, there were serious debates over whether Bryant would surpass Michael Jordan’s six.

Never happened, but Title No. 5 added to Bryant’s legacy. Kobe was synonymous with victory for a generation. It reinforced his stature. His image had taken a hit after his feud with Shaquille O’Neal resulted in Shaq being traded, after the duo won three straight titles together in 2000, 2001, and 2002.

The 2009-10 Lakers entered the season favored to repeat as champions. It was a tall team with seven-footers Pau Gasol and Andrew Bynum, and 6-foot-10 Lamar Odom, a sixth man as versatile as a Swiss army knife. The Lakers also added Metta World Peace (the former Ron Artest)– an addition that would pay huge dividends in the playoffs.

L.A. needed to be on-point because Bryant was starting to show signs of decline. According to the advanced metrics, this was his worst season in over a decade in terms of box plus/minus (+4.1), value over replacement player (4.4), and player efficiency rating (21.9).

The Lakers started 18-3 and finished 57-25, the best record in the loaded West. All eight playoff teams in the conference finished with at least 50 victories. To give you an idea of how stacked the West was, the No. 8 seed Oklahoma City Thunder (50-32) featured a young roster of future MVPs Kevin Durant, James Harden, and Russell Westbrook.

Despite the West’s depth, L.A. reached the NBA Finals without being pushed to an elimination game. When the playoffs originally started, the matchup many were anticipating was Kobe vs. LeBron. LeBron James was the regular-season MVP, piloting the Cleveland Cavaliers (61-21) to the NBA’s best record. But there was the matter of the Boston Celtics.

The Celtics (50-32), the 2008 NBA champs, had a disappointing regular season. But Paul Pierce, Ray Allen, and Kevin Garnett were battle-tested. And they upset the Cavaliers in the second round, 4-2, and then ousted the Orlando Magic to play for a championship.

Lakers vs. Celtics in the NBA Finals, Part XII. The rivalry the NBA was built on, spanning decades and generations. These flagship franchises have won the most championship in the sport – 17 for Boston and 16 for L.A. What made the 2010 meeting particularly interesting was that it was a rematch of the 2008 NBA Finals when Boston won 4-2. This including crushing the Lakers in Game 6, 131-92 – one of the most shocking routs in postseason history.

Now Kobe and his team had a shot at redemption. Most expected this to be a close series. The Lakers got off to a strong start with a 102-89 victory in Game 1. But in the next game, Boston roared back to tie the series behind Ray Allen’s NBA Finals record eight three-pointers for 32 points.

With the series shifting to Boston for three straight games, the Lakers were in trouble. In Game 3, the Lakers got an unexpected boost from a savvy veteran. Derek Fisher, 35, scored 16 points – -11 in the fourth quarter — in a 91-84 victory.

But this was never going to be easy. Boston seemed to seize control of the series by winning the next two games at home, pushing the L.A. to the brink. What followed was the Lakers’ most impressive game of the playoffs – an 89-67 beatdown in Los Angeles. Even worse for Boston was losing center Kendrick Perkins for the series due torn knee ligaments.

Boston coach Doc Rivers has routinely argued that the Celtics would’ve won the 2010 NBA Finals if not for that injury. Considering Perkins’ contributions (5.8 points, 5.8 rebounds), that seems like an overstatement.

Game 7 was among the ugliest Game 7s in NBA Finals history.

“It was ugly as hell,” Lakers reserve Jordan Farmar told the L.A. Times. “It was a wrestling match. Both teams didn’t make no shots. We were just scraping, clawing, trying to fight.”

How bad was it? The winning team shot 32.5 percent, including Bryant going 6-for-24. Luckily for the Lakers, Metta World Peace bailed them out with 20 points in an 83-79 triumph. His three-pointer in the final minute helped seal the championship.

Bryant was now in elite company Finals MVP for the second time and NBA champion for the fifth time. He was now just one title away from matching Jordan. That, of course, never happened. The following season, the Lakers were swept out of the playoffs by the eventual champion Dallas Mavericks in the second round. Jackson, the most successful coach in NBA history, retired. And the Lakers hadn’t been a legit championship contender since.